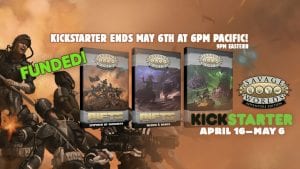 The Rifts® have officially opened on Kickstarter and The Tomorrow Legion now faces off against new apocalyptic threats from the darkest corners of North America and Earth’s ancient past! And we’re pleased to report the new campaign funded in just seven minutes!

Building on the incredible success of Rifts® for Savage Worlds comes three new Worldbooks further detailing the factions, locations, and threats of Rifts® North America. Inside you’ll find new allies, armaments, and abilities to aid Tomorrow Legionnaires in their fight against the evils of the Megaverse®. 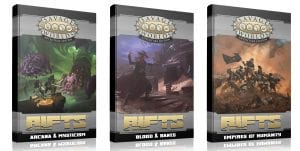 Best of all, not only can you get these three NEW Worldbooks for Rifts®, we’re also printing revised and updated versions of the original core Rifts® for Savage Worlds books (The Tomorrow Legion Player’s Guide, Game Master’s Handbook, and Savage Foes of North America) and making it easy for you to upgrade as well!

These deals are only available during this Kickstarter and pledge manager. After that they’ll be listed at their full retail price.

Head over to the Rifts® for Savage Worlds: American Armageddon Kickstarter page RIGHT NOW to find out more and to pledge your support.

The Tomorrow Legion is counting on you!