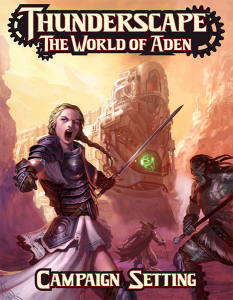 The Kickstarter for Thunderscape: The World of Aden is closing soon, and I’d hate for you to let it sneak by. Visit a battered-but-unbroken world where knights, sorcerers, and mechamagical golems fight together against the nightmarish hordes spawned by the Darkfall, a world where a burgeoning magical-industrial revolution was slowed — but not stopped — by an onslaught of unspeakable creatures springing from an unnatural darkness.

The Age of Thunder has not ended, and Aden will not go quietly into that unwholesome night.

You might’ve heard of Aden before. It’s been in several computer games, RPGs, and novels. Oh, did we mention many of those were from our own Shane Hensley? Shawn Carman of Kyoudai Games has secured the rights to bring Shane’s world to Pathfinder, and an already-achieved Kickstarter stretch goal is bringing the world of Aden to Savage Worlds, as well!

There’s only a few days left. Don’t be left in the dark—it’s not a friendly place at all any more!