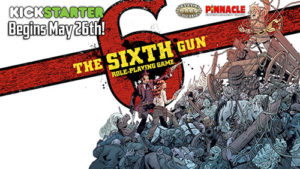 Six pistols of otherworldly power surfaced in the darkest days of the Civil War. The First strikes with ungodly force. The Second spreads the flames of Perdition. The Third kills with a flesh-rotting disease. The Fourth calls up the spirits of those it has slain. The Fifth can heal the wielder from even a fatal wound. The Sixth holds the key to rewriting the world. And, until only recently, the Sixth gun was lost.

Join us next Tuesday at noon on Kickstarter as we bring the world of The Sixth Gun to Savage Worlds from the comic series by writer Cullen Bunn and artist Brian Hurtt. Heck, if you want to literally join us, be sure to check out the True Fan of the Sixth Gun backer reward—all the stuff plus you get to play in a game at Gen Con Indy 2015 GMed by Cullen Bunn with Scott Woodard at the table–and Brian Hurtt will doodle something in your Sixth Gun RPG book! There’s even more than that, but we gotta’ have some surprises for next week.

Well, be sure to check it out when the Sixth Gun Kickstarter is up next Tuesday, anyway. They’ll go fast, amigo…