The New Savage Worlds is Coming to Kickstarter! 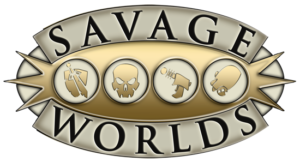 Mark your calendars, tie a ribbon around your finger, or start scratching tally marks into your bedroom wall (well, maybe just stick to marking your calendars) because the Kickstarter for the brand new edition of Savage Worlds launches in just a few weeks time and you’re definitely not going to want to miss this one!

First off, we want you to know that Savage Worlds “Black” is officially just “Savage Worlds.” The “Black” in the title was just a code name and a reference to an original cover concept, which was going to be solid black except for the Savage Worlds logo. We now have a very cool illustrated cover we’re using instead that ties it into all the Savage World Companions.

Second, the Kickstarter is currently planned for Tuesday, October 16th. That might change for a number of reasons—a big competitor launches something in the same time period, a component isn’t quite ready for us to show, personnel issues, etc.—but right now we are on track.

Third, the price will be $39.99 for the 192-page Limited Edition hardback while the softcover will be $29.99. (The price of the PDF has yet to be determined.) There will be other offerings during the Kickstarter as well.

Fourth, rest assured that the game is very compatible with previous editions and settings and we will publish a FREE conversion and update guide.

Finally, some of the changes we’ve already let slip are new Chase rules, tweaks to lots of Edges and Hindrances, Tests and Tricks, some skill, core rules, and Power Modifiers changes first previewed in The Savage World of Flash Gordon, the inclusion of Quick Combat (now called Quick Encounters as it handles more than combat!), and quite a few NEW sections, including new Setting Rules we think you’ll love.

The core book does not include the GM’s “advice” chapter found in previous editions. That will be released separately.

Much of this and more will be previewed leading up to and during the Kickstarter, along with many other great surprises as well.

Thanks for your patience amigos, and we look forward to you all experiencing the next exciting iteration of Savage Worlds!