The Doomtown Tombstone Trilogy Concludes with Hell’s Comin’ With Me

Following the Doomtown Reloaded expansions Too Tough to Die and Out for Blood, the Doomtown Tombstone Trilogy comes to its epic conclusion in Hell’s Comin’ With Me!

Following the latest fiction piece in The Gomorra Dispatch, the story will be influenced by you, the players, on October 26, in Tombstone at the Doomtown Destination Event! Players attending the Jonah’s Alliance Event in Edinburgh on June 30 will decide which major Deadlands Weird West City (City O’Gloom, Shan Fan, Dodge, Lost Angels, or Deadwood) will be the next focus for Pine Box Entertainment as they continue to expand the universe and tell tales through future Doomtown cards and fiction. 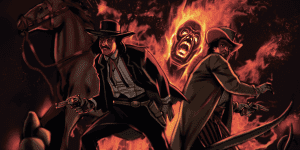 As we’ve followed Wendy and Lucy from Gomorra and Tombstone, the next character focus is the outlaw Jonah Essex. In addition, the exciting Twilight Protocol Series will come to a climax in Tombstone as we learn the fate of Valeria Batten and her posse seeking to end the Fourth Ring once and for all.

To learn more about the current story and these upcoming round-ups, visit the Pine Box Entertainment forums, where guides are posted for the Tombstone Event, Edinburgh, Origins Game Fair, and Gen Con. We will conclude the year at PAX Unplugged with the Doomtown: Somethin’ About Some Bullets for a Tombstone epilogue round-up.