Just in time for the holidays, we’ve got several spectacular Savage Worlds bundles now ON SALE in our store including a few of our very popular, officially-licensed lines like Fear Agent™, Flash Gordon™, The Goon™, Lankhmar, and The Sixth Gun!

For only $109.99 (retail $137.89) celebrate the 40th anniversary of the big-screen motion picture with The Savage World of Flash Gordon™ Roleplaying Game bundle featuring Limited Edition hardcovers of the core rulebook and Kingdoms of Mongo sourcebook, Bennies, dice, Double Action Deck, Combat Maps, and much more!

Join The Goon™’s crime syndicate and get your mitts on a sweet bundle of delights including the core book in Limited Edition hardcover, GM Screen, Bennies, and ALL the PDFs, for the low, low price of just $64.76 (retail $80.95).

For just $99.99 (retail $124.92) wander the smog-filled streets and alleys of the City of Sevenscore Thousand Smokes with our amazing Lankhmar collection featuring softcover copies of Lankhmar: City of Thieves, Lankhmar: Savage Foes of Nehwon, Lankhmar: Savage Tales of the Thieves’ Guild, and Lankhmar: Savage Seas of Nehwon, along with the GM Screen and The Eyes of Goro’mosh Adventure, 24″ x 30″ poster map, and more.

And last, but certainly not least, saddle up and head into the wild and wizardly world of The Sixth Gun Roleplaying Game with a right bonanza of a bundle containing the core rulebook and Companion in softcover, GM Screen + The Winding Way Adventure, Bennies, Figure Flats, and so much more, all for only $80.69 (retail $100.86).

Cross a few items off the list and surprise that Savage Worlds fan in your life with a box under the tree brimming with their favorite licensed settings!

We love bundles here at Pinnacle, and if you’re looking to save a few bucks and get your hands on big chunky boxes brimming with Savage Worlds goodness (perfect for holiday gifts (hint-hint)), our discounted bundles are for you!

Additionally, toss a few Add Ons into your cart like the black leatherette Savage Worlds Collector’s Edition (while supplies last), extra sets of Powers or Status Cards, Templates, and more.

And be sure to check out all our other discounted bundles for settings like East Texas University, Fear Agent™, Flash Gordon™, Lankhmar, The Goon™, and Weird Wars Rome.

As many of us have some extra time on our hands right now, what better way to fill that time than by painting up a few metal minis for some of your favorite Savage Worlds settings.

We have recently restocked several figures from the extremely talented folks with Bronze Age Miniatures including original models for Lankhmar, The Last Parsec, The Goon™, Fear Agent™, Flash Gordon™, and many, many more!

Browse through the Miniatures section in our store today and add a little heavy metal to your game tables with our official 28mm miniatures.

In the City of Sevenscore Thousand Smokes, danger lurks down every dark alley. Sinister sorcerers summon terrible forces in their crumbling towers. Treacherous rogues of the Thieves’ Guild prowl the Plaza of Dark Delights. Assassins from the Slayers’ Brotherhood work the Tenderloin District. And hunched figures skitter beneath the streets, waiting for their chance to rise. But there is action, adventure, and wealth here too–if your rogues have the skill and bravado to claim it!

While our original Lankhmar boxed sets have since sailed off into the sunset, we are now offering you a spectacular bundle of eight print + PDF items at 20% off!

And don’t forget, we currently have four other sweet Savage Worlds bundles on sale including Fear Agent, The Savage World of Flash Gordon, The Goon, and The Sixth Gun, all also for a whopping 20% off!

You still have a couple more weeks before anyone drops down your chimney, giving you plenty of time to get a jump on some of the amazing deals in our storewide holiday sale.

Right now, along with all the box sets, core rulebooks, supplements, combat maps, dice, and other items, our various metal miniature sets and singles are also now ON SALE!

This includes figures for use with Lankhmar, The Savage World of Flash Gordon™, The Last Parsec, The Goon™, Fear Agent™, The Sixth Gun, Deadlands, and Deadlands Noir.

Add a little dimension to your game tables with these official metal minis for some of our most popular Savage Settings!

Fantasy Grounds is a virtual tabletop allowing you to play a variety of roleplaying games online. Recently, they posted a 12-month overview (up to the end of Q3 2019) of the most popular RPGs played through their app.

While we weren’t all that surprised to see such high numbers for D&D (the elephant in the game room(!)), it appears that Savage Worlds is holding its own in third position!

Visit GeekNative to check out all the stats presented in colorful, easy-to-read pie charts and tables.

And if you’re not playing Savage Worlds on Fantasy Grounds, consider subscribing today! Fantasy Grounds offers a number of rulesets and expansions including Deadlands, Deadlands Noir, Lankhmar, The Last Parsec, and many more!

For those of you who get your gaming on via Fantasy Grounds, you can now upgrade your Savage Worlds Virtual Tabletop with a few new supplements!

A couple of our licensees are also offering brand new Fantasy Grounds goodies including Under His Skin, a Novice-level fantasy adventure for four to six players from AAW Games, as well as The Dark Creed: Cultists for Nemezis from GRAmel (Beasts & Barbarians, Tyrnador: Fate of Ventar).

Visit Steam or the FG Shop to find these and many other fine Savage Worlds products for your Fantasy Grounds Virtual Tabletop! 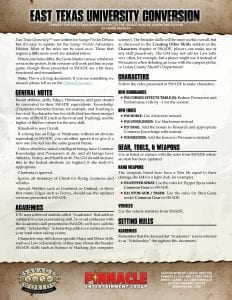 Since the launch of Savage Worlds Adventure Edition, many of you have been wondering how to adapt your favorite Savage Worlds Settings to #SWADE. To that end, we are offering FREE PDF conversion docs through our online store!

This week, we uploaded new multi-page conversion documents for East Texas University and Rippers. We’ve also got documents available for The Last Parsec, The Goon™, Lankhmar, and Fear Agent™. And while most of the rules as written in those original products can be used as-is, those that require a little more work are detailed in these free downloads. 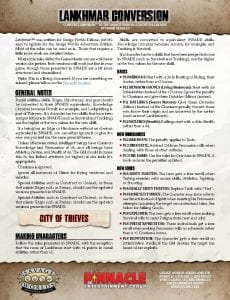 Since the advent of the new Savage Worlds Adventure Edition, many fans have been wondering how to adapt their favorite Savage Worlds Settings to #SWADE. To that end, we are offering FREE PDF conversion docs through our online store!

Right now, we’ve got multi-page documents for The Last Parsec, The Goon™, Lankhmar, and Fear Agent™, with even more in the works. And while most of the rules as written in those original products can be used as-is, those that require a little more work are detailed in these free downloads.

At long last, The Savage Seas of Nehwon is now available to order from our store in hardback, softback, and PDF.

Expand your adventures beyond the shores of Lankhmar and into the high seas of Nehwon where new and terrible foes await in the fathoms below!

The Savage Seas of Nehwon contains everything a Game Master needs to forge terrific tales of high sea-based adventures for Lankhmar or any fantasy Savage Setting.

Discover the secrets of the Inner Sea, Outer Sea, Frozen Sea, Sea of Stars, Sea of the East, and Lankhmar’s docks and harbors. Upgrade your seafaring scoundrels with new Edges, Hindrances, powers, and Setting Rules dealing with ships and the sea. Crew up various ocean-going vessels and place obstacles in the path of the heroes with new rules for savage storms and a bevy of of bloodthirsty Denizens of the Deep. And challenge those sailors with a number of sea-based Savage Tales worthy of Lankhmar’s creator, author Fritz Leiber.

Expand your nautical adventures and order your copy of Savage Seas of Nehwon in hardback, softback, and PDF today!