Those fine folks over at Pine Box Entertainment are continuing the tradition of the Doomtown Marshal Badge Prize at Gen Con this weekend by hosting this year’s roundup… online!

Players will compete to earn the title of Marshal and then work with the Doomtown Design Team to craft a brand new Doomtown card.

Join the Doomtown Discord server now to discuss this upcoming event with Doomtown players around the globe. The event itself will run for several weeks so you can take time to schedule your game with your opponent and then report the results to [email protected].

The top player from each faction will receive a shiny, acrylic Tombstone Outfit card!

If you’re interested in learning how to play Doomtown online, Pine Box’s volunteers are ready to help! They are also offering a Greenhorn Roundup for those that know Doomtown, but want to check out the virtual version via the Online Card and Tabletop Gaming Network (OCTGN) or Tabletop Simular (TTS) on Steam.

Giddyup, potential Marshals! It all starts by saying “howdy” on the Doomtown Discord server today!

Once again, it’s time for Gen Con (The Best Four Days in Gaming™), and as always, both Savage Worlds and Doomtown will be well-represented! (For complete Doomtown details, check out last week’s article, Doomtown Takes on Gen Con 2019.)

Wednesday evening, kick things off at The 16th Annual Stink in Union Station’s Grand Hall. There, Jodi Black (Chief Operations Officer and Managing Editor for Pinnacle Entertainment Group) and Clint Black (Savage Worlds Core Rules Brand Manager) will be running fast and furious demo games of the new Savage Worlds core rules, and giving away $5 coupons for use in the Pinnacle online store. As Clint and Jodi are also representing their own company, Carolina Game Tables, these short demos will be run on their counter-height Kitchen Game Table, so they should be easy to spot! Please note that you do not need a ticket to attend The Stink.

Thursday morning, make your way into the Exhibit Hall to visit Studio 2 Publishing in booths 1929 and 2029. There you’ll find Savage Worlds box sets, core rulebooks, supplements, and accessories including dice, Bennies, miniatures, and more. You’ll also find Doomtown base sets and all the latest expansions including pre-release copies of Out for Blood!

Close by, Jodi and Clint will be at the Carolina Game Tables booth (1953) showing their new “5×5” prototype table and answering all your Savage Worlds questions.

And finally, not only are our friends with Saving Throw hosting a FREE meetup for fans at the Sheraton Indianapolis City Centre, Thursday night at 7pm, be sure to grab a ticket for their East Texas University WildCards Live Show, on Saturday from 4 to 6pm! Follow Saving Throw on social media (Facebook, Twitter, and Discord) for up-to-the-minute details.

Safe travels, and we look forward to seeing you at Gen Con 2019!

Gen Con 2019 is next week (gasp!), and if you’re planning on attending, be sure to keep your eyes out for a number of Savage Worlds and Doomtown events (check out this week’s news for details about those), a few Pinnacle personnel, some notable exhibitors, and a few other odds and ends worth your while:

First up, for all your Savage Worlds and Doomtown needs, head to the exhibit hall and visit Studio 2 Publishing in booths 1929 and 2029. There you’ll find Savage Worlds box sets, core rulebooks, supplements, and accessories including dice, Bennies, miniatures, and more. You’ll also find Doomtown base sets and all the latest expansions including pre-release copies of Out for Blood!

Carolina Game Tables will also have the counter-height Kitchen Game Table set up over in Union Station’s Grand Hall on Wednesday evening for The 16th Annual Stink. From 5pm to 8pm, Clint will be running fast demo games of the new Savage Worlds core rules, and donations from both Pinnacle and Carolina Game Tables will be available at this fun gamer meet & greet event!

Lastly, Thursday night at 7pm, our great friends with Saving Throw will be hosting a causal and totally free meetup for their fans. At the moment, it is scheduled to take place at the Sheraton Indianapolis City Centre, but be sure to follow them on social media (Facebook, Twitter, and Discord) for up-to-the-minute details. We have it on good authority that you might just run into a few familiar faces there from both Pinnacle and Pine Box Entertainment!

We look forward to seeing everyone next week at the Best Four Days of Gaming!

Secure a Seat at the Table for a Flash Gordon™ Game to Remember! 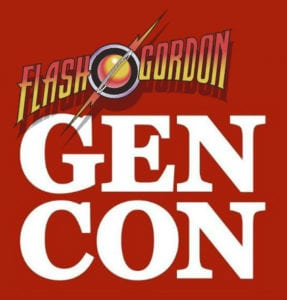 On Friday, August 3rd, Brand Manager, Scott Woodard (The Sixth Gun, Flash Gordon™) will be running an exclusive, invite-only session of The Savage World of Flash Gordon™ at Gen Con 2018, and you (yes, YOU) can join him at the game table!

If you’re attending Gen Con, head over to the Savage World of Flash Gordon™ Pledge Manager now and upgrade your pledge to the $500 reward level! Not only will this lock in a seat at the game table alongside Scott, Clint Black, Jodi Black, and a few of our friends from Saving Throw, you’ll also enjoy dinner with the entire crew, and you’ll bring home a host of Flash Gordon™ goodies including the “Savior of the Universe!” Collector’s Box Set with signed, Limited Edition hardcover books, an incredibly rare, Sunday newsprint page of the original Flash Gordon™ comic strip, poster maps, GM Screen with 32-page adventure, double Action Deck, Bennies, dice, the polished brass Cliffhanger Token, and a copy of the Savage Worlds core rules. Please note that the last day to lock in a seat for the Gen Con game is next Tuesday, July 31st!

And if you’re wondering what awaits you in next week’s scenario, continue on, brave reader! 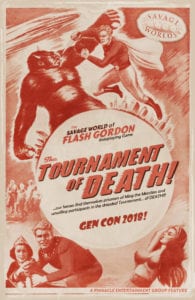 In this thrilling adventure of The Savage World of Flash Gordon™, our heroes find themselves prisoners of Ming the Merciless and unwilling participants in the emperor’s dreaded Tournament of Death! Will they survive the Battle Royal? Will they be victorious in the Test of the Flaming Lances? And will they triumph in the Dance of the Poison Daggers? Find out next week at Gen Con 2018!

The Pledge Manager is open until August 13th and rewards will begin shipping in September, so jump in today to ensure you get your books and accessories early!

See you next week at Gen Con and on the surface of the rogue planet of Mongo. Hail Flash! 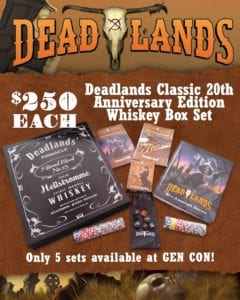 For those of you attending Gen Con who might have missed out on getting the deluxe Deadlands Classic 20th Anniversary Edition Boxed Sets that we originally offered through our Kickstarter a couple years back, you’re in luck!

We’re bringing just five (yep, I said “FIVE”) Deadlands Classic 20th Anniversary Edition Boxed Sets with us to Gen Con next week and you could be one of the lucky hombres to walk away with one (or two) tucked under your arm!

While there’s no running in the Gen Con Exhibit Hall, be sure to make your way over to Pinnacle Entertainment / Studio 2 Publishing (booths 1929 & 2029) quickly because we’re only bringing five of these sets with us and once we sell out, that’s it for the show!

We hope to see you all in Indianapolis next week!

* Please note that the “Whiskey Box” does not contain any actual rotgut. Sorry, amigos! 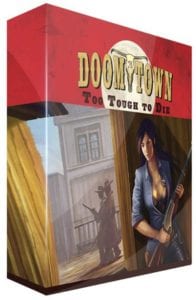 If you’re heading to Gen Con next week and you’re a Doomtown: Reloaded fan who’s been waiting patiently to get your mitts on the There Comes a Reckoning Trunk as well as the Too Tough to Die expansion, then work out the quickest path from the main doors of the Exhibit Hall to Studio 2 Publishing (booths 1929 & 2029) because we’re bringing along just 20 copies of each per day and you’ll have to act fast to get yours! 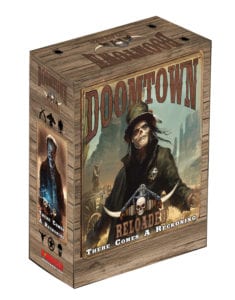 Get yer Doomtown pre-release items next week at Gen Con 2018!

With Gen Con right around the corner and all the Savage World of Flash Gordon™ physical products arriving on our shores in late August, we’ve thrown the Pledge Manager doors open once again until August 13th to give you all another chance to pledge your support and maybe even participate in our special, invite-only Flash Gordon™ game at Gen Con!

That’s right, if you’re already planning on attending Gen Con this year, upgrade your pledge to the $500 level today to secure a seat at the table for an exclusive session of The Savage World of Flash Gordon™ GMed by Brand Manager, Scott Woodard! Originally offered as the Prince/Princess of Mongo reward in last year’s Kickstarter, fearless supporters will be joining Scott, Jodi, and Clint, along with a few of our great friends from Saving Throw, for an epic and catered adventure! At this level, you’ll also get the “Savior of the Universe!” Collector’s Box Set with signed, Limited Edition hardcover books, an ORIGINAL SUNDAY NEWSPRINT page from the Flash Gordon™ comic strip, and a copy of the Savage Worlds core rules.

Rewards will begin shipping in September, so jump into the Pledge Manager today to ensure you get your books and accessories early!

Are you ready to save every one of us??? 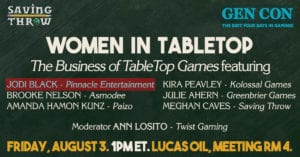 If you’re attending Gen Con in a couple weeks, be sure to get your tickets for the Women in Tabletop: The Business of TableTop Games panel featuring a number of game industry luminaries including our very own Jodi Black (Chief Operations Officer and Managing Editor for Pinnacle Entertainment Group).

Presented by our great friends with Saving Throw, this seminar will take place Friday, August 3rd at 1pm Eastern in Meeting Room 4 of the Lucas Oil Stadium.

This is sure to be a fascinating and fun discussion and there are only a few tickets left, so grab one now! It looks like this panel might sell out. If that happens to you, plan to swing by on the day of in case any seats open up. The panel is free to badge holders.

Get your questions ready for Jodi and the rest of the panel and we look forward to seeing you there!

With Gen Con just a few weeks away, the latest batch of ENnie Awards nominations has been posted and we are thrilled to see Savage Worlds represented once again!

Also, while it’s not a Savage Worlds product, Torg Eternity: Core Rules (Ulisses Spiele) has been nominated for Best Rules. This is definitely worth noting as this book was co-written by our very own Shane Lacy Hensley!

Voting for this year’s ENnies will be open from July 11th- July 21st. (Update: ENnies voting is here at this link: http://www.ennie-awards.com/vote/2018/)

Congratulations to ALL of the nominees and we look forward to this year’s awards ceremony on Friday, August 3rd at 8pm Eastern at the majestic Union Station in downtown Indianapolis, IN.

“Pathetic Earthlings. Hurling your bodies out into the void, without the slightest inkling of who or what is out here.” – Ming the Merciless

While it’s still a couple months away, this year at Gen Con, we’re taking a few brave heroes off to the planet Mongo to face Emperor Ming in an exclusive session of The Savage World of Flash Gordon™ GMed by Brand Manager, Scott Woodard! Originally offered as the Prince/Princess of Mongo reward in last year’s Kickstarter, fearless supporters will be joining Scott, along with a few of our great friends from Saving Throw, for an epic and catered adventure starting Friday night at 7pm!

And while the Kickstarter and Pledge Manager for Flash Gordon™ have closed, Gen Con attendees interested in jumping in for this reward can Email Jodi Black (Chief Operations Officer and Managing Editor for Pinnacle Entertainment Group) at [email protected] to grab this interstellar reward! Not only will it guarantee you a spot at the game table, you’ll also get the “Savior of the Universe!” Collector’s Box Set with Limited Edition hardcover books signed by author Scott Woodard, an ORIGINAL SUNDAY NEWSPRINT page from the Flash Gordon™ comic strip, and a copy of the Savage Worlds core rules.