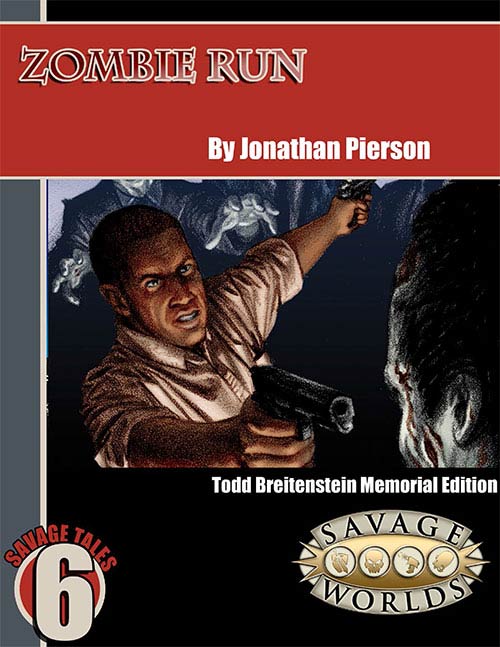 In Loving Memory of our friend, Todd Breitenstein.

All proceeds from this edition of Zombie Run go to the family of Todd Breitenstein, co-owner of Twilight Creations, creator of Zombies! and many other great games, and a wonderful person taken from us all too soon.

Please consider giving to the American Cancer Society or the research charity of your choice until this terrible disease is cured.

If you would like to make an additional donation, please use the following link:

The world didn’t go to hell overnight. It took a whole two months.

Saturday, July 2, 2005. Sometime around midnight, Eastern time, the recently-dead started coming back to life. We woke up Sunday morning, turned on our radios and TVs, went outside and picked up our newspapers, and learned that rotting corpses were wandering the streets, forcing their way into homes, attacking and eating people.

In the U.S., the president declared a national emergency. Local and state police joined forces with the Army, Marines, and National Guard, and for about a week, we held our own against the rising tide of the dead. But how do you defeat an enemy when your own casualties become his foot soldiers?

Maybe if we had been fighting a living enemy, a foreign invader, things would have gone differently. But facing our own dead, risen from the grave with no thought but to kill and devour us …we panicked. First came the riots and looting, then the killing. Law enforcement and military units fell apart. People turned on each other like terrified animals, everyone trying to save his or her own skin. And every person killed by his or her neighbor became one of them.