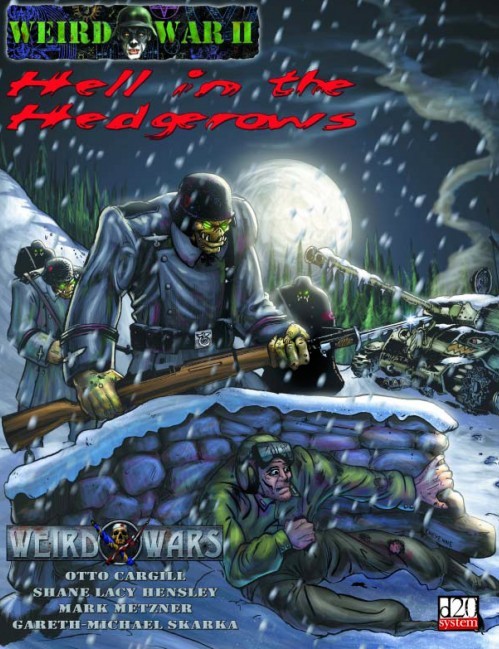 It’s D plus ten. Your hero has been in Normandy for less than two weeks when the call comes from HQ. A team is needed to mop up a small, out of the way village on the edge of the St. Lo breakout. You grab your M1, strap a few pineapples to your belt, load up on bullets and K-rations, and head out—never knowing you’ve just taken your first step into the Weird Wars.

This all-new adventure collection for Weird Wars contains four screaming sagas of war-borne horror. It all starts in the hedgerows of France, then moves inland, eventually taking players into the heart of Germany herself!

Designed to be played as stand-alone adventures or as a short campaign, Hell in the Hedgerows introduces new characters to the weird part of the war. If they survive their first contact with the supernatural, they’ll be dragged into even more precarious situations. Survive that and they might just be contacted by the OSI for “special duty.” It’s an honor, soldier. One to die for.

Hell in the Hedgerows is the first supplement for Weird War Two: Blood on the Rhine, a roleplaying game of historical horror set during the final days of World War Two. You must have this book to play these adventures.

Be the first to review “Weird War Two d20: Hell in the Hedgerows PDF” Cancel reply