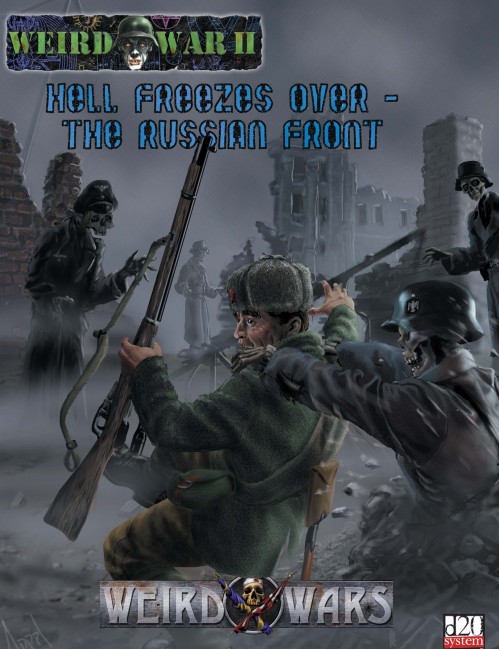 There is no pity on the Russian Front. There is no remorse. There is only the cold, dark night and the certainty of a lonely death. What will be your fate? Your comrades speak of the fascist’s cruelty, of “General Winter” freezing the very marrow in your bones, and your own Commissars killing those who do not show proper patriotism.

They also whisper that darker things have awakened—things that prowl the night and feast on the blood and bones of those who cross their path. Yet still, you fight. You fight for Mother Russia on the banks of the frozen Volga, in the rubble of Stalingrad, and on the frigid steppes where massive tank battles rattle the very Heavens themselves.

Inside Hell Freezes Over is everything you need to play Weird Wars on the Eastern Front. There are new classes such as the Commissar, new skills, and complete statistics for Soviet equipment like the T-34, the SU-122, and the dreaded Joseph Stalins.

War Masters get a complete history of the Weird War in Russian, as well as a host of diabolical new horrors from the must unforgiving, cruel, and merciless front of the war. Hell Freezes Over is a setting for Pinnacle Entertainment Group’s Weird Wars: War Two™ roleplaying game, and requires the first book in the series, Blood on the Rhine™.