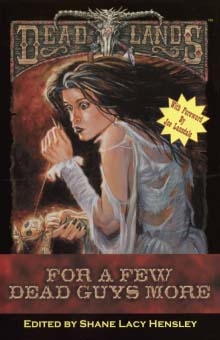 Only 25 left in stock

They say “Hell hath no fury like a woman scorned.” In this second volume of the Anthology with No Name, the senoritas get their payback. In “Some Mercy, Some Justice, Some Magic”, ancient matriarchal sorcery protects a young girl from an other-worldly horror in “Nuna Daul Tsuny”, a young Cherokee woman who suffered a great atrocity on the Trail of Tears comes back to haunt the living.

Enter the world of Deadlands™, where abominations prowl the High Plains, the dead walk, and vengeance is sometimes served colder than the grave. The second volume in theAnthology with No Name, includes 11 more twisted tales of the Weird West, including the second part of “Hate” and “Head Games”, by the creators of Deadlands. You’ll also find “Hellbent for Leather”, by Steeldriver author Don DeBrandt, and a wild tale of the best-selling Deadlands: Doomtown Collectible Card Game by one of its creators, Rob Vaux!