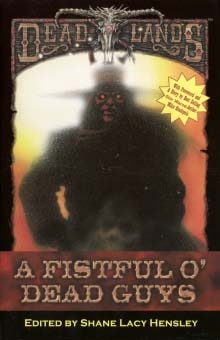 The world of Deadlands™ looks like the Old West on the surface – there’s plenty of wild desperadoes and heroes with more sand than the Mojave Desert – but there’s more, too. Out here the shadows are a little bit darker. The hangin’ trees are a little bit taller. And the High Plains are coated in the crimson light of the blood moon. That howl you heard might be a lone wolf looking for its cub. Or it might be a werewolf hunting for meat.

So come on in, but tread carefully. This spaghetti western comes with meat…

Inside this first volume of the Anthology with No Name, you’ll find eleven twisted tales of the Old West by some of the top names in adventure fiction. We’ve rustled up best-selling Star Wars® author Mike Stackpole, Desperadoes author Jeff Marriotte, and even the creators of Deadlands themselves!

“Forward” by Mike Stackpole
“Welcome to the Weird West” introduction to the world.
“Hate: Part One” by Shane Lacy Hensley
“Reborn on the Bayou” by Matt Forbeck
“Homecoming” by John R. Hopler
“The Hex Files” by Don DeBrandt
“The Taste” by Clay & Susan Griffith
“A Resurrection, Three Hangings, and an Apache Arrow” by Kevin Ross
“The Drive” by T.G. Shepherd
“Let the River of Death Wash Over Me” by Richard E. Dansky
“Behind Enemy Lines” by Jeff Mariotte
“Comes the Storm” by Ree Soesbee
“The Parker Panic” by Mike Stackpole