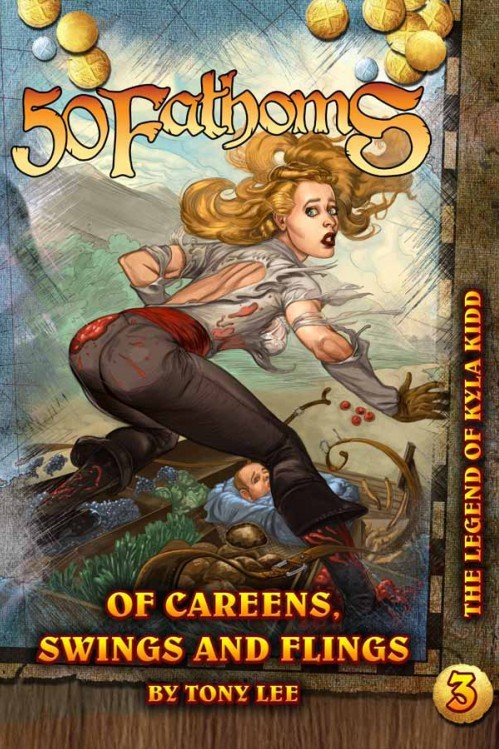 The Legend of Kyla Kidd III: Of Careens, Swings, and Things PDF

Kyla and Ethan continue their adventure, crossing paths with the treacherous McEldoo, a Spanish fire mage, and his twin sister–an assassin! But the most challenging threat of all may be a debaucherous dance with none other than Bruno Baltimus–master of the city that bears his name and a thousand lurid indecencies!

The world of Caribdus is drowning–cursed by three vengeful Sea Hags. Dozens of island nations have already been destroyed and the races beneath the Shimmering Seas have been ravaged by their drifting ruins and turbulent tides. Through the mists at the center of this catastrophe drifts ships bearing strangers–time-tossed visitors form Earth.

One of these is Kyla Kidd, fast on the trail of her long-lost father Captain William Kidd. But is she seeking to clear his name? Or find his much-rumored treasure? And is the treasure merely gold and jewels, or something far more amazing!

Kyla’s journeys take her into the heart of the Devil’s Cross–home of the Sea Hags–where she battles betrayal, savage monsters, and horrors beyond imagining in this three-part trilogy written by Tony “Salty Sea Dog” Lee and beautifully illustrated in full-color by Richard “Keelhaulin'” Clark!

Be the first to review “The Legend of Kyla Kidd III: Of Careens, Swings, and Things PDF” Cancel reply