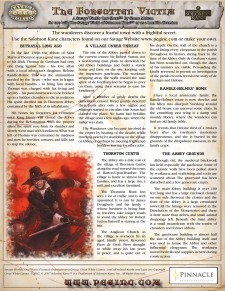 In the late 1300s the Abbott of Saint
Marys at Thornton was a good man, devoted
to his flock. Thomas de Gretham had only
one thing against him – his love affair
with a local aristocrat’s daughter, Heloise
Randle-Holme. This was the ammunition
needed by the Dean – who was in league
with local bandits – to bring him down.
Thomas was charged with lax living and
devilry – his punishment was to be bricked
up in a hidden chamber to die in isolation.
His spirit dwelled on in Thornton Abbey,
contained by the faith of its inhabitants.

Be the first to review “The Forgotten Victim” Cancel reply