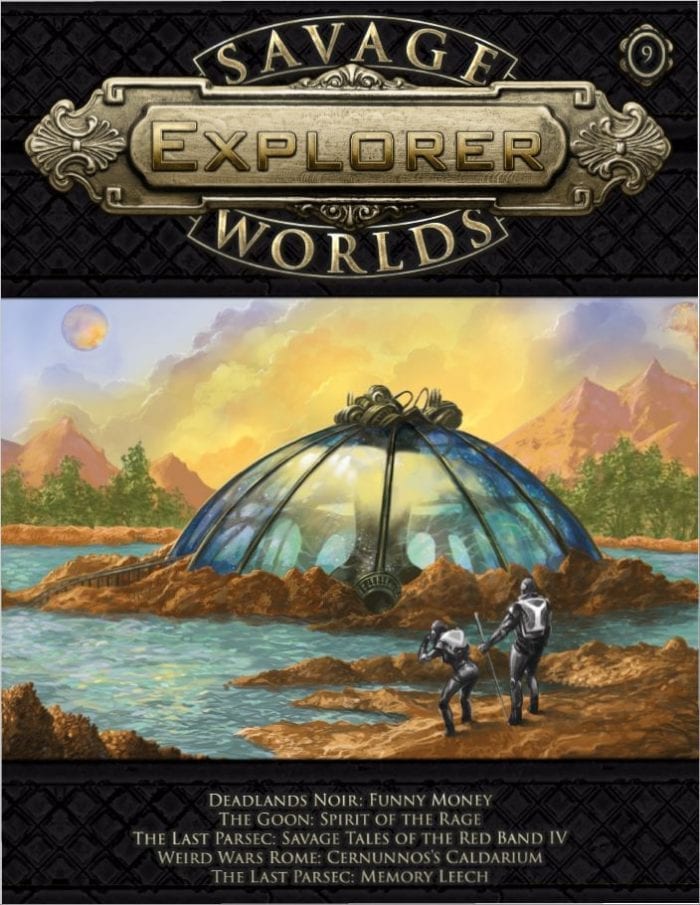 Whether you’re saving a village from certain death, following the path of destruction behind a superhero of questionable morality, or discovering the poisonous secret behind counterfeit currency—savage settings need brave explorers!

The heroes are hired to look into a very public murder on the doorstep of one of New Orleans’s largest banks. The victim turns out to be a poor farmer who just happened to be carrying a pile of counterfeit cash. And that’s only the tip of iceberg in this twisted Deadlands Noir mystery. The adventure is set in New Orleans any time after 1935 and is suitable for investigators of nearly any Rank.

The Last Parsec: Tales of the Red Band IV by Matthew Cutter

Savage Tales of the Red Band is an ongoing serial for The Last Parsec. Its parts comprise a loose Plot Point Campaign when assembled. The GM needs access to the Science Fiction
Companion and The Last Parsec Core. A sleeper team of licensed Quixotic-Red-6 (QR-6) contractors arrives in a newly discovered system in the Triangulum Galaxy. But what the team didn’t know until quite recently is that their immediate superiors in Red Band Conglomerate have been compromised by an ancient race known as the Collectors.

The Goon™: Spirit of The Rage by Matthew Cutter

A gangster’s work is never done.
You were just mindin’ your own business, heading down to the grocer to pick up a few crucial items for your poor ol’ Aunt Petunia. Bless her heart, Petunia can’t barely walk no more due to the gout, but she sure can talk about her “stories” she watches on the boob tube all the time.

Well, well, well…we figured you mooks’d be back sooner or later. Turns out yer timing is right on the money, because we’ve got a rollicking new tale of sordid emotion, freewheeling thrills, and tooth-extractin’ action for The Goon™.

In this adventure the contubernium must protect their castrum against strange warriors…and stop them at the source!

The heroes find themselves in Briton, manning one of the castra along Hadrian’s Wall. It is early autumn in the 13th year of Emperor Hadrian’s rule (130 AD). The castrum is located a few milia south of the village of Kinderry. The duties are normally that of boring drills, keeping the peace and working on the wall itself. As of late, however, the Britons have been restless.

These bizarre creatures hail from the farthest reaches of known space, and are found on damp or swampy worlds where the presence of sentient beings is rare. They typically feed on other fauna, though they have come to prefer intelligent species—when they get the chance.

The Savage Worlds Explorer requires a copy of Savage Worlds core rules and may require the core books for the setting, such as The Last Parsec Core or The Goon™ RPG. Add dice, a deck of cards, and explorers, and let the fun begin!

Matthew Cutter is the author of Closer You Are: The Story of Robert Pollard and Guided By Voices (Da Capo Press), numerous supplements for Deadlands The Weird West, and The Goon™ Roleplaying Game. His short story “A Lonesome Place to Die” appears in The Cackler graphic novel. He lives in Rockville, Maryland, with his wife and their three children.

Michael Sprague is an engineer in the normal world, with interests in history, physics, high-powered model rocketry and too many other things to list. He’s played tabletop RPGs since the stone age of the industry. He lives near Rochester, New York, with his wife, two young adult children, and two cats. One of the founding members of the Western NY Savages, he can be found at their Savage Sundays in Buffalo and Rochester, as well as most of the local cons.
Nathan Carmen: Born and raised in Cincinnati, Ohio, Nathan writes whenever he gets the chance. When he’s not busy being a stay at home parent, Nathan leads Tricky Troll Games, a Savage Worlds licensee.