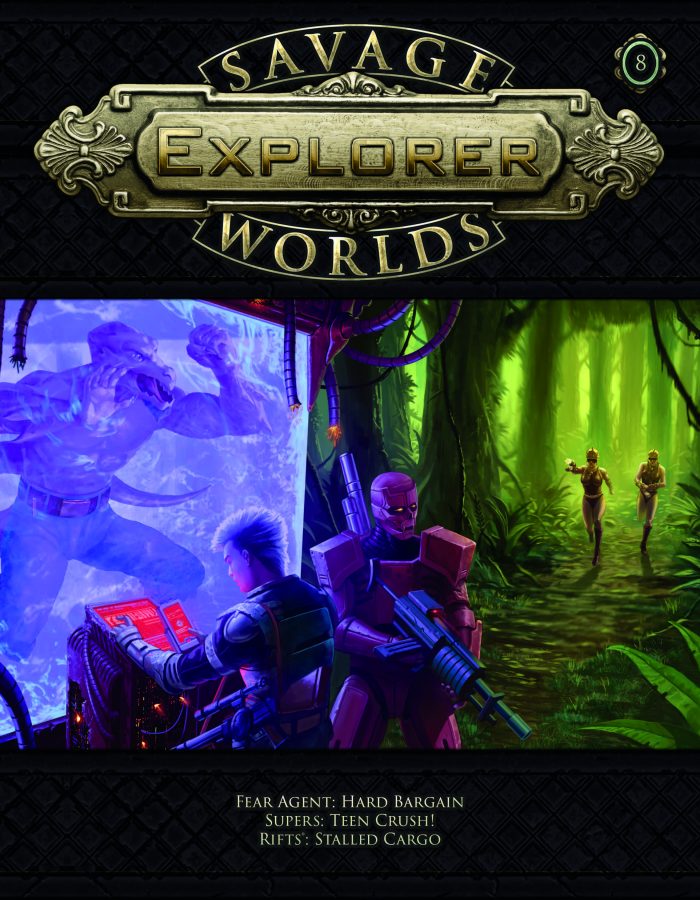 Whether you’re locked in gladiatorial combat on an alien world, helping a team of young supers to rescue their fallen mentor, or allies of the Tomorrow Legion in desperate combat against vile slavers—savage settings need brave explorers!

Savage Worlds Explorer is a continuing series featuring Savage Tales for all our settings written by new authors and industry veterans. This installment features tales by John Goff, Tracy Sizemore, and Cameron Lyle and Roby Duncan.

The crew is approached by a Klopin merchant with a seemingly easy job hauling trade goods to a primitive backwater planet. Nature itself, and an employer who’s less than forthcoming about all the details, turn a simple delivery mission into a fight for survival—and better bargains.

“Teen Crush” is a standalone one– or two-session adventure for the Super Powers Companion. A group of teenage superheroes reaches the end of their mentorship with Captain Crush, an eccentric but beloved hero of Jupiter City. Just as the protégées ready themselves to attend an official graduation ceremony and press conference, they are side-tracked by an attack on the Cryo-Technica building downtown. After saving several hostages from an insane villain named Hot Head, Teen Crush discovers it has bigger problems on its hands. Captain Crush has disappeared, the Crush Network is down, and villains all over the city are emboldened by the resulting hysteria. Investigation reveals the villainous K-pop diva, Bubble Pop Princess, is behind everything, and all eyes turn to Teen Crush to save their mentor and their city.

Stalled Cargo is an adventure for Savage Rifts®, set at the forested Minnesota fringe of Coalition territory. It sends the Tomorrow Legionnaires on a race against time to save a captured caravan of D-Bee refugees before they are discovered by an approaching Coalition military force. Following a series of calamities, the trapped refugees are in dire need of rescue…and the clock is ticking. This adventure contains a mix of negotiation and combat suitable for up to six Tomorrow Legionnaires of Novice or Seasoned Rank.

Tracy Sizemore is a freelance RPG author and contributor who has written for Pinnacle (Savage Worlds) and for the Torg Eternity line from Ulysses North America. She is also the creator of Teen Crush and the Han Cluster. Tracy is a proud Tucson native. She’s also a singer, music writer, and a huge k-pop fan–which you can ask her about, but only if you’re truly ready to disappear down the rabbit hole.

Cameron Lyle is an educator, comedian, and freelance writer living in the heart of Southern California. He has been an avid gamer for over 30 years, led by a strong passion for speculative fiction in all its forms. He is, as of this writing, still waiting for Godot.

Roby Duncan is a lover of dystopian cityscapes and technologically mediated economic disasters. Consequently, he lives in Los Angeles. A philosophy student, writer, and corporate media consultant, Roby splits his free time between voraciously consuming stories of all kinds and spewing their digested remains onto the table for his gaming group.