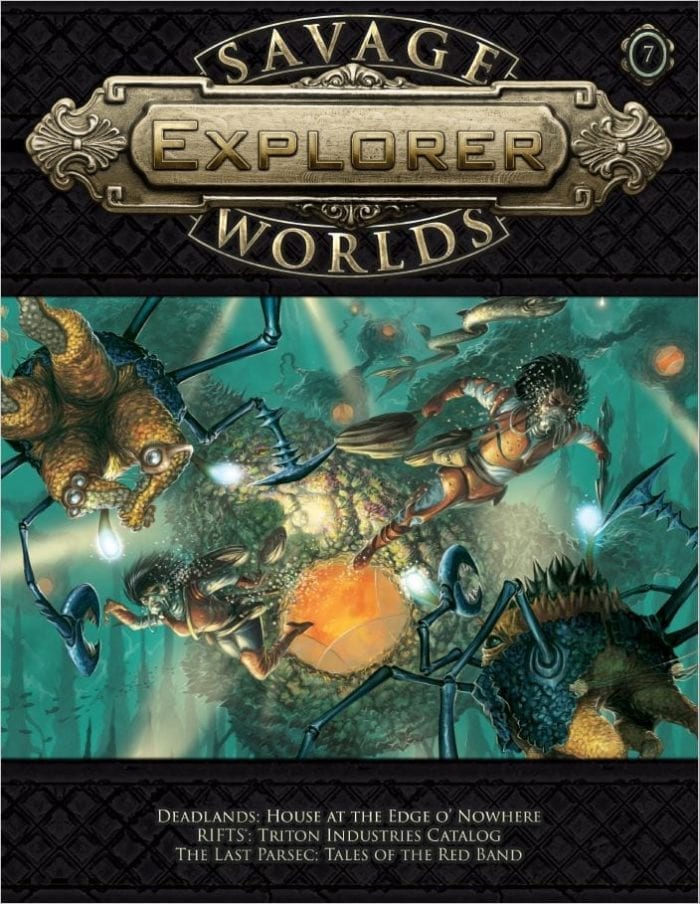 Whether you’re a hired hand in the Weird West, a hero for the Tomorrow Legion looking for new gear, or off to explore known worlds for JumpCorp—savage settings need intrepid explorers!

Savage Worlds Explorer is a continuing series featuring Savage Tales from all our settings written by new authors and industry veterans. This installment features tales by Ben Meginnis and Matthew Cutter!

A series of baffling heists. The chilling legacy of a mad architect’s all-consuming vision. A cunning spirit whose true goals are shrouded in secrecy. Can a newly arrived posse sort out the mystery before a dark fate befalls the folk of Brass Spur? This adventure is intended for a posse composed of Veteran or higher Rank heroes, although lesser cowpokes may prevail with some sound strategy, luck, and maybe a few allies.

New gear for The Tomorrow Legion from Triton Industries serve underwater (and usually in the air, too). Pistols, rifles, torpedoes, armor, vehicles, and more.

This article works best when used with Rifts®: The Tomorrow Legion Player’s Guide.

Savage Tales of the Red Band is an ongoing serial for The Last Parsec, the parts of which can be assembled to form a loose Plot Point Campaign. The GM needs the Science Fiction Companion and The Last Parsec: Core. The heroes serve as licensed members of Quixotic-Red-6, a top-secret exploration charter and subsidiary of the Red Band Conglomerate. Their motto: We make the impossible probable.

Matthew Cutter is the author of Closer You Are: The Story of Robert Pollard and Guided By Voices (Da Capo Press), numerous supplements for Deadlands: The Weird West, and The Goon Roleplaying Game. His short story “A Lonesome Place to Die” appears in The Cackler graphic novel. He lives in Rockville, Maryland, with his wife and their three children.

Ben Meginnis is a robot sent from the future to avert/cause a terrible disaster. He has since become distracted writing, designing games, petting cats, and learning the meaning of love. He can be found in Indiana, running as many games as his powerful CPU can manage.