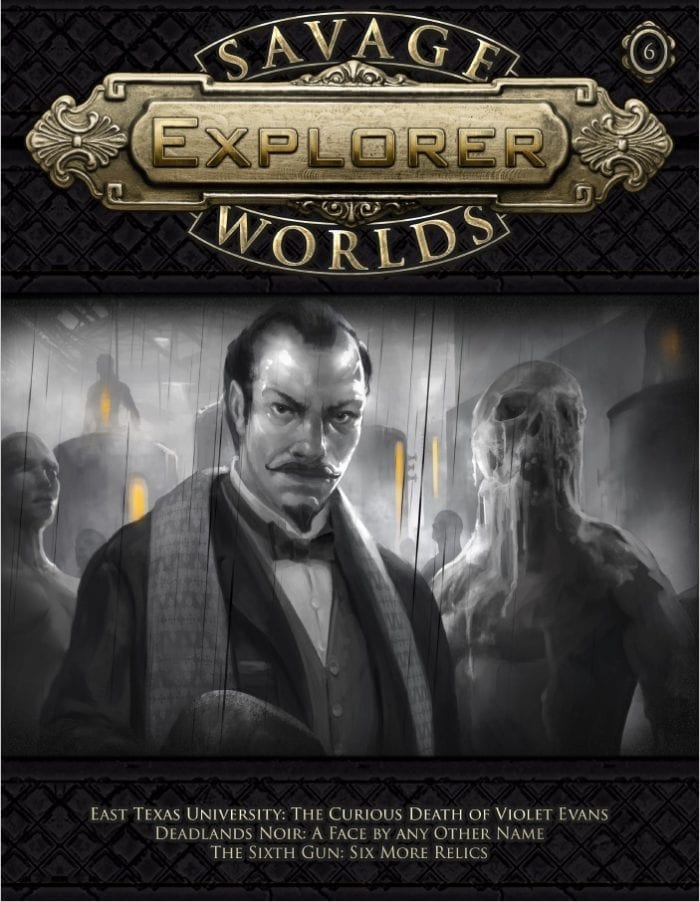 Savage Worlds Explorer is a continuing series featuring Savage Tales from all our settings written by new authors and industry veterans. This installment features tales by Tracy Sizemore, John Goff, and Scott A. Woodard!

“The Curious Death of Violet Evans” is a horror mystery for East Texas University that offers students of Sophomore rank or higher (preferably with some Ritualism under their belts) a chance to be heroes and save lives. During a late-night class project in the Big Thicket, students meet a 10-year-old girl named Violet Evans. She’s a ghost, and she died on her birthday. The investigation of her 50-year-old murder reveals an ancient cycle of supernatural evil, with a trail of unlikely victims in its wake.

Deadlands Noir: A Face by Any Other Name by John Goff

In A Face by Any Other Name, the gumshoes are hired to look into a puzzling burglary. As they dig deeper, they’re drawn into a tale of art, greed, and vengeance. Set in New Orleans during the 1930s, this investigation is suitable for characters of any Rank.

The Sixth Gun: Six More Relics by Scott A. Woodard

Draw inspiration from these treacherous items, craft new adventures, or structure entire campaigns around them. But be warned—a few of these objects can be downright deadly in the wrong hands!

Tracy Sizemore is a freelance RPG author and contributor who has written for Pinnacle (Savage Worlds) and for the Torg Eternity line from Ulysses North America. She is also the creator of Teen Crush and the Han Cluster. Tracy is a proud Tucson native. She’s also a singer, music writer, and a huge k-pop fan–which you can ask her about, but only if you’re truly ready to disappear down the rabbit hole.

Scott A. Woodard is not only the writer and brand manager of The Savage World of Flash Gordon™ and The Sixth Gun, he’s also written a few Doctor Who audio dramas, worked as an award-winning Writer/Producer for Warner Bros. and Disney, built and puppeteered animatronic creatures for several movies, and he occasionally works as a voice actor and podcast producer.