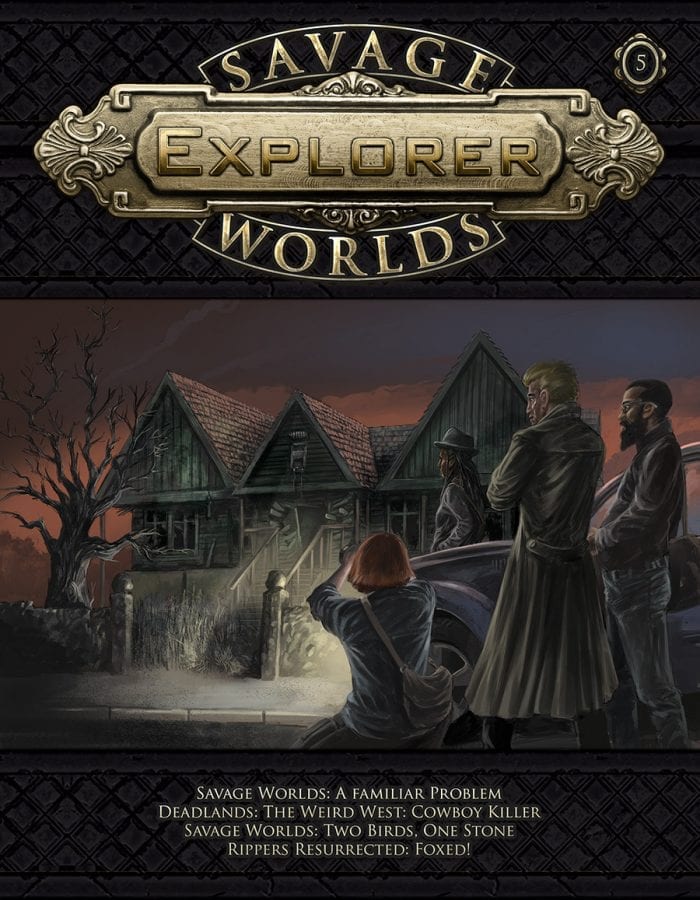 Savage Worlds Explorer is a continuing series featuring Savage Tales from all our settings written by new authors and industry veterans. This installment features tales by Camdon Wright, Kyle Carty, John Goff, and Sean Tait Bircher, with two scenarios which only require the core rules!

Someone gunned down Sarah and Hunter Williams in cold blood. Sarah was an aspiring sculptor but paid the bills with her job as a bank teller. Hunter was a painter who spent his
days building websites for other artists. It’s the cops’ job to figure out whodunit—and they might not have to look very far.

Deadlands the Weird West: The Cowboy Killer by Kyle Carty

There’s a saying about desert-dwelling life: It’ll either stick you, prick you, or kick you. The ”cowboy killer” became infamous as the absolute last thing a rider wanted to fall onto in the event that his horse threw him from the saddle.

A modern investigative horror scenario intended for Novice characters, in “A Familiar Problem” the investigators are retained by Alice and George Dotson to find their 26-year-old son. Lonny’s been missing for more than two days now, and it’s only a matter of time before the court finds out he’s jumped bail. If the investigators can’t find that little rat, the Dotsons will lose their home!

Passing through Tokyo, the Rippers stop to assist the Tokyo Lodge and unwittingly become drawn into a horrifying scheme of revenge. A kitsune—a fox demon— stalks the Tokyo Rippers for an affront from years ago.

Camdon Wright is a game writer and designer who loves to tell stories, create weird games, and share a gaming table with new people. He lives in Colorado with his wife, their two kids, and a dog named Rockford. Rockford is a good dog.

Kyle Carty lives in New Jersey and balances writing, graphic design, and making wreaths for a living. He’s worked on the Deadlands: Good Intentions and Red Markets Kickstarters and has various credits with Baby Bestiary, Base Raiders, EN5ider, and more. He loves bombastic action, honobono settings, horror, and long walks on the beach.