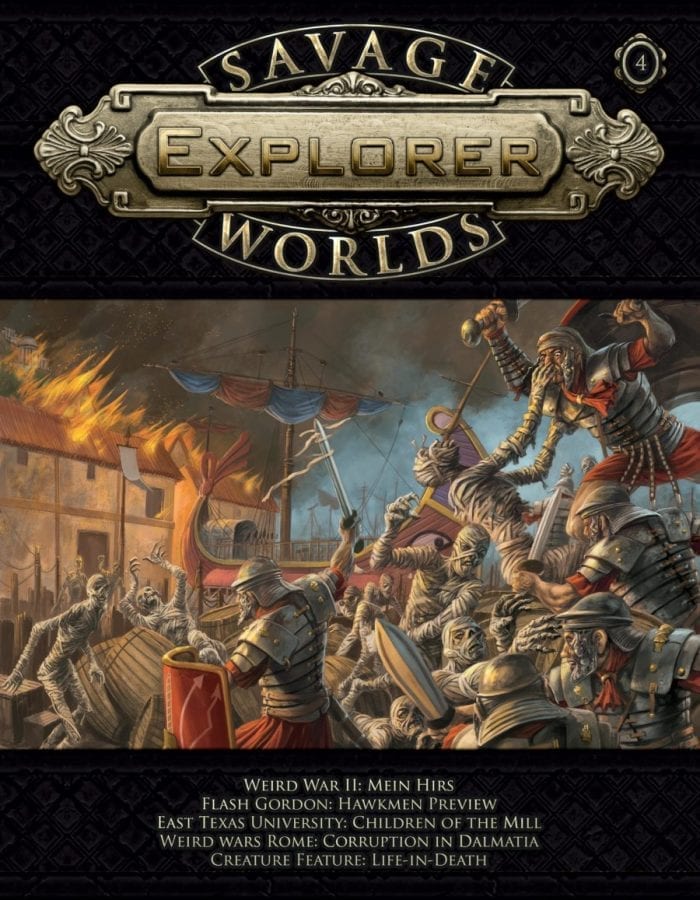 Savage Worlds Explorer is a continuing series featuring Savage Tales from all our settings written by new authors and industry veterans. This installment features tales by John Goff, Kenneth Mahan, Matt Hoadley, and David Garrett, plus a sneak peek at the Hawkman from the upcoming Flash Gordon™ RPG!

During the Battle of the Bulge, the heroes are assigned to man a roadblock at a bridge crossing the Aisne River. What do the reports of ancient standing stones and menhirs mean for our heroes—or their foes?

Pennants flying, lances held in readiness, a squadron of savage hawkmen hurtles from the skies! Stat blocks for a sample Hawkman and Prince Vultan!

East Texas University: Children of the Mill by Kenneth Mahan

Your students take a short cut on the way back to campus one evening, and find themselves in a lumber mill town out of time…

In the province of Dalmatia, rumors spread of monsters moving across the land. Merchants report curious weather patterns over the provincial capital of Salona, a growing change in the population of the city, and the sudden odd behavior of the provincial governor Septimius Flavius Gallus. Will your cohort survive the ensuing horror?

Adventure seeds and details on the Queen of the Land of Nod, suitable for use in variety of horror genres!

David Garrett retired from the US Air Force and currently lives in Colorado. He has been a table top RPGer since the early ’80s. David is a horror author and maintains a blog dedicated to horror writing and game design. Since retiring in 2016, he has been an active member of the Rocky Mountain Savages community.

Matt Hoadley lives in Lubbock, Texas where, in between making episodes of podcasts, he is once again considering going back to school. He has been gaming since he was first introduced to the hobby in middle school. Now, he has a mild obsession with playing warlocks and drawing far too many maps.

Kenneth Mahan lives in the Southwest, where he attends graduate school while teaching special education. He’s been gaming since high school when his first character was turned into a nice stew by kobolds. Whenever possible, Kenneth enjoys creating campaigns for his favorite RPGs and working as a freelance writer.

Scott Woodard  is the author of Pinnacle’s weekly website updates, The Sixth Gun RPG, and the Flash Gordon™ RPG. He has also worked a variety of odd jobs, including practical special effects fabricator and puppeteer for the film industry, TV and radio promo producer, voice actor, author, playwright, and podcaster, winning several industry awards along the way.