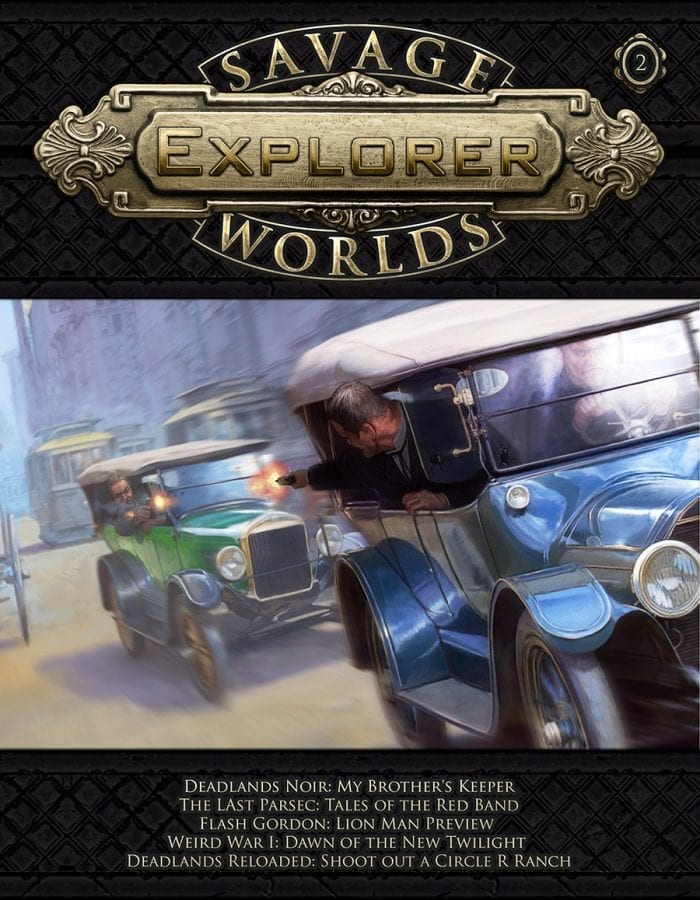 Whether you’re hunting bloodthirsty critters in the Weird West, exploring the perilous fringes of Known Space, maintaining your grades while grappling with nefarious evil at East Texas University, or facing supernatural horrors of war on the Eastern Front in 1916—savage settings need intrepid explorers!

Savage Worlds Explorer is a continuing series featuring Savage Tales from all our settings written by new authors and industry veterans. This installment features tales by Matthew Cutter, John Goff, Teller, and Scott A. Woodard.

His Brother’s Keeper is an adventure by Brand Manager John Goff for Deadlands Noir, set in 1930s New Orleans. It takes the heroes from the Garden District’s posh mansions to the edge of the bayous and back again. It contains a mix of investigation and combat, and is suitable for characters of all Ranks, although the Marshal may want to toughen up the foes for Veteran or higher characters.

The Last Parsec: Savage Tales of the Red Band

Savage Tales of the Red Band by Brand Manager Matthew Cutter is an ongoing serial for The Last Parsec, the parts of which can be assembled to form a loose Plot Point Campaign. The GM needs access to the Science Fiction Companion and The Last Parsec: Core.

Weird War One: Twilight of the New Dawn

Twilight of the New Dawn by Brand Manager Teller is an adventure for Weird War One set in the final year of the Great War. It details the event that leads to the end of the global conflict, one way or another, and should serve as the culmination of the other plot point campaigns. The characters are part of an international team charged with stopping the New Dawn and saving the world. They can be soldiers or civilians from any of the warring powers, from either side of No Man’s Land. Successfully completing this mission will bring about the end of the centuries-long machinations of the cabal and smash the organization once and for all. Of course, if your players are not successful, the war will end in a catastrophe of Biblical proportions and usher in an age of darkness and despair.

Deadlands: Shootout at the Circle-R Corral

Deadlands: Shootout at the Circle-K Corral by John Goff is an adventure for Deadlands. The Iron Men plague Kempe County’s financial establishments. This gang of bank robbers relies on an array of gizmos and weird science creations to give them a decided edge over any small-town law dogs that might oppose them. Time to call in a posse, amigo. Although this adventure is set in “Kempe County,” moving it elsewhere is as simple as changing the place names. This adventure is recommended for characters of Seasoned Rank or higher.

A preview of one of Flash Gordon’s staunchest allies by Brand Manager Scott A. Woodard. The Lion folk look a bit like bipedal versions of their Earthly namesakes, even down to their thick, tufted tails and luxurious manes.