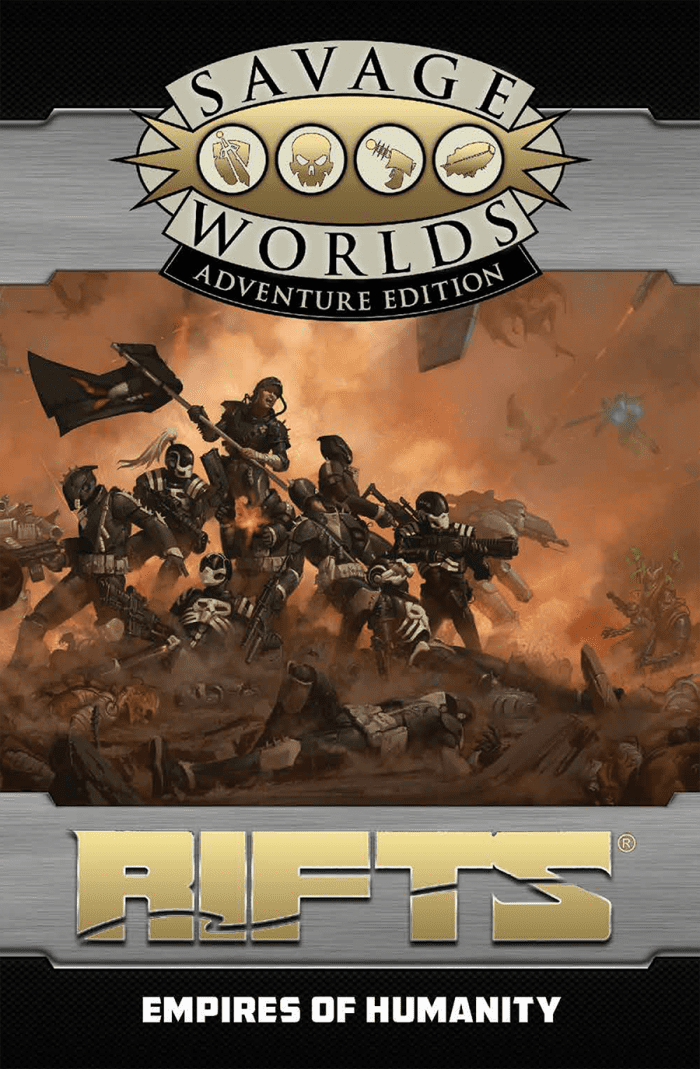 THE RIFTS® SHATTERED THE GOLDEN AGE OF TECHNOLOGY.

The Coalition’s Emperor prosecutes his Crusade for Humanity—seeking to absorb non-arcane human societies and purge all others—encroaching on both the Tomorrow Legion’s potential allies and enemies, accelerating the pace of events set in motion by the Fall of Tolkeen. Corporate states, despotisms, and wild barter towns all employ unbelievably high-tech might.

Threats such as the Coalition States, Free Quebec, and Pecos Empire abound as do potential allies in places like the New West, Great Lakes Kingdoms, and Texas Free Lands; then there are the enigmatic forces of Archie Three, the Shemarrian Nation, and the Republicans to contend with.

Savage Worlds Rifts® North America: Empires of Humanity shines the spotlight on the sci-fi aspects of Rifts®. New Mutant Animal races expand beyond Dog Boys while a new Iconic Framework allows players to design their own robot characters from scratch. Treatment Edges offer state-of-the-art possibilities for Juicers while expanded Combat and Professional Edges give gunfighters and mercenaries their day in the sun.

Extensive new gear options and rules—for power armor, vehicles, guns, explosives, cybernetics, bots, and more—give players and Game Masters more toys than they can handle. The intrigue-laden Plot Point Campaign Ex Machina reveals the hidden history of the Great Cataclysm to the players, while new Savage Tales and over 20 new foes give Game Masters more technological threats to unleash on the Tomorrow Legion.