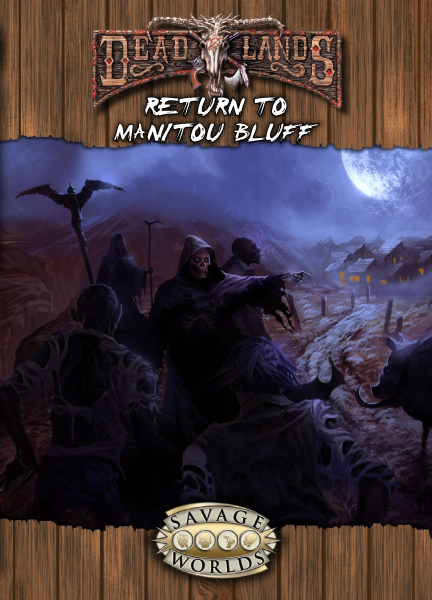 During the Battle of Lost Angels, a catastrophic earthquake tore Clover Mesa into four parts and revealed a motherlode of ghost rock at its center. Everyone from Kang’s triad to the Union to the Wasatch Rail Co. are after its riches, and they’ll do whatever it takes to seize them.

But Clover Mesa wasn’t always an object of desire. It used to be a dumping ground for the dregs of Maze society, and it was known by a different name back then—Manitou Bluff.

Return to Manitou Bluff is an adventure for Legendary heroes, including all the people, places, and plots you need to run this epic tale. Take care, amigo! Things aren’t always what they seem, and sometimes death—or somethin’ worse—is hiding just around the bend.

Return to Manitou Bluff is not a complete game. It’s a supplement for the Deadlands Reloaded setting for the Savage Worlds game system.