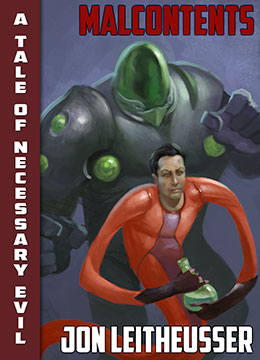 Wendigo Tales are electronic books in the .epub and .mobi (Kindle) formats.

Stretch is a super villain down on his luck. He’s behind on alimony and child support, and the occasional job for the resistance might help in the war against the alien invaders, but it doesn’t do much for his bank account. His new assignment is to break into the terrible drone factory—where humans are turned into super-enhanced, zombie-like slaves for the v’sori. But what he finds inside is a little more—and a little more personal—than his next score.

Necessary Evil: The Fate of the world lies with the scum of the earth! This short fiction takes place in Pinnacle Entertainment Group’s world of Necessary Evil, a roleplaying game setting for its Savage Worlds line. An alien invasion has wiped out most of the world’s super heroes, leaving only the super villains to save the earth.

Be the first to review “Necessary Evil: Malcontents” Cancel reply