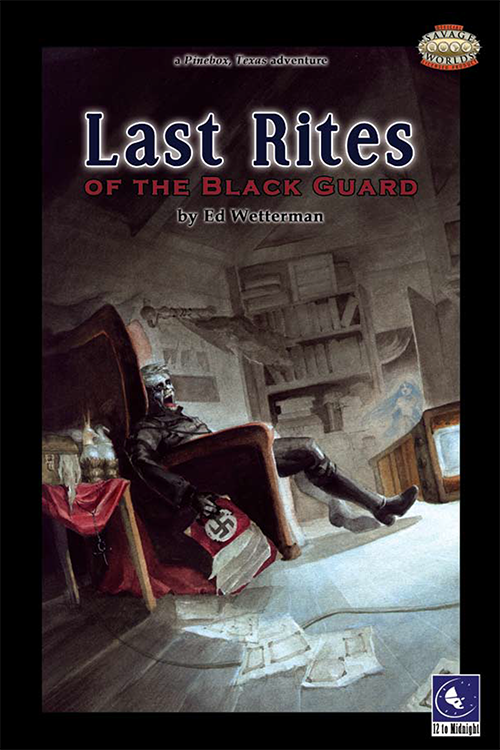 The Nazis left their cruel mark on the world more than 50 years ago, and some of those wounds still bleed.

Hitler and other high-ranking Nazis were enamored by the idea of using the Occult in their attempt at world domination. In their quest for power they conducted horrific experiments on the weak, but with the defeat of the Nazis and the freeing of the experiments’ survivors, humanity thought that their evil would never rise again.

Your characters find themselves the only ones willing to help a single mother deal with the terrifying hauntings tormenting her family. But before you can put them to an end, you’ll have to investigate their origins by spending an evening in the house yourselves. If you dare.

Last Rites is a 48 page, thoroughly-bookmarked PDF complete with color cover and illustrations, maps, player handouts, and helpful sidebars throughout. The 12 to Midnight website also offers free downloads of cool extras such as audio recordings of ghosts (known by ghost-hunters as Electronic Voice Phenomena), bonus photos, and more.

Last Rites of the Black Guard was originally published in 2009 by Savage Worlds licensee 12 to Midnight. Pinnacle’s own Shane Hensley updated the adventure from its d20 origins to use Savage Worlds core rules. It may take a little translation to play, but it’s worth it!