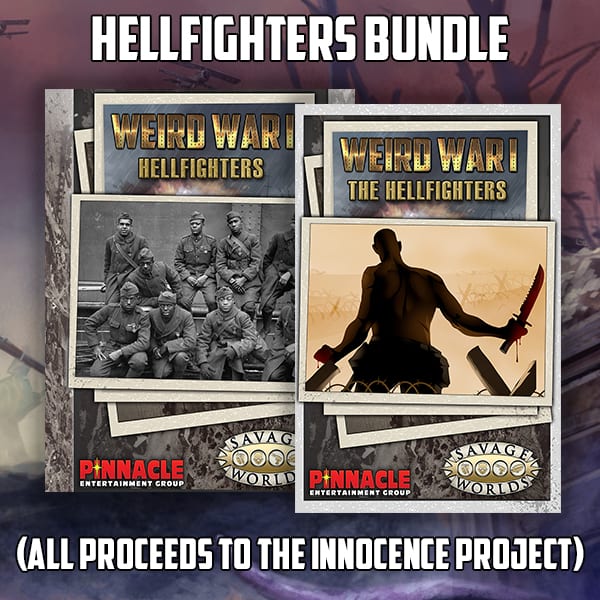 Hellfighters is a Plot Point Campaign for the Weird War I setting that follows the exploits of the American 369th Infantry Regiment from the time the unit is attached to the French army until shortly after the Second Battle of the Marne. The campaign covers a period of five months and a wide geographic area of the Western Front.

The bundle also includes a Wendigo Tales short story about the Hellfighters: Sergeant Buck Henry’s men said they’d follow him to Hell and back. Somewhere along the French front, they just might get the chance to prove it.

The 369th Infantry Regiment is home to the African-American “Harlem Hellfighters.” Their regiment spent the most time in the frontline trenches of any American unit in World War 1…and suffered the most casualties as well. One hundred years ago, these men fought bravely and gave their lives for this country with the hope that their service would help bring an end to racism. It’s long overdue.

** All proceeds will go to the Innocence Project:

“The Innocence Project, founded in 1992 by Peter Neufeld and Barry Scheck at Cardozo School of Law, exonerates the wrongly convicted through DNA testing and reforms the criminal justice system to prevent future injustice.” – InnocenceProject.org

To give to the Innocence Project now, click here.