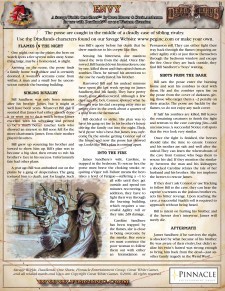 A year ago Bill was ambushed out on the
plains by a gang of desperadoes. The gang
tortured him to death, just for laughs. Such
was Bill’s agony before his death that he
drew manitous to his corpse like flies.
Sensing his bitterness, one manitou
raised the twin from the dead. Once Harrowed,
Bill hunted down his murderers, one
by one, killed them and then raised them as
zombies. Then, he turned his attentions to
the one he really hated, his brother.

Be the first to review “Envy” Cancel reply