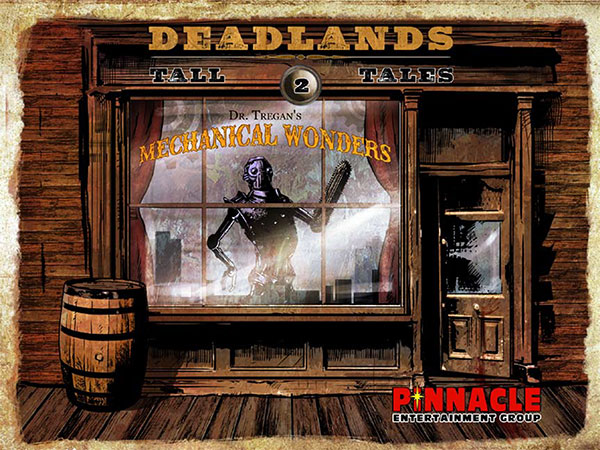 Doctor Tregan’s Collateral Trouble is a story roleplaying game set in Deadlands: The Weird West™. In this Tall Tale, Doctor Tregan has been abducted in the dead of night by bandits. His shop has been left unattended. And it’s only a matter of time before his trail runs cold.

The town of Buford Junction relies on the good doctor’s work to keep things like generators, tractors, and weapons humming. Left unattended, the shop could fall into the wrong hands and some of his inventions could wreak havoc on the citizens of Buford Junction. Only a few stalwart men and women have what it takes to rescue Doctor Tregan and see that justice is done.

Who has taken him? Is it old creditors come to collect? Or nefarious outlaws with unkind plans? Will the doctor be killed once he builds them a fantastic machine? Or is he a hostage held for some enormous ransom? Perhaps he’s just a pawn in some sick game.

The heroes who must survive the wild are lightning-fast gunfighters, card-slinging hucksters, mad scientists, or even common townsfolk. But they’d best be quick—the doctor’s fate is in their hands.