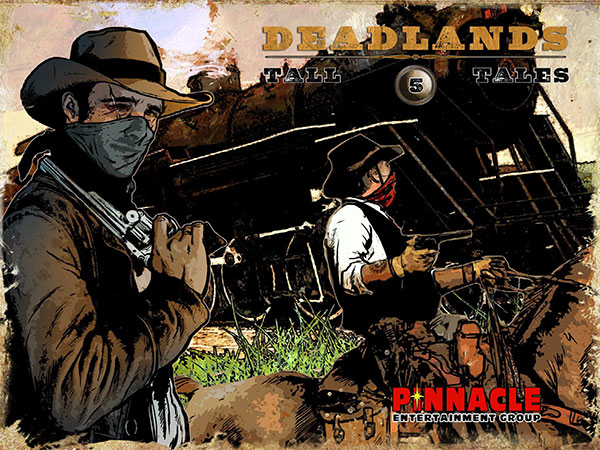 Ghost Train is a story roleplaying game set in Deadlands: The Weird West™. A group of outlaws have recently heard of a train coming through Bottleneck Falls loaded with ghost rock — not to mention a high-stakes floating poker game. Armed to the teeth with guards, the train has never been successfully robbed. But that won’t stop these desperados from launching their plan.

Ghost Train plays differently from any of the previous Tall Tales. For starters, the players only have some of the information available at the onset. Secondly, there are three different ways to play this one, which means there are a lot more set-up options. Thirdly, there are new rules for resolving conflict, a Cliffhanger, and a new ending chart for each story type. Finally, the PCs can be the bad guys in this one if they want to.

Get ready for the fastest, wildest Tall Tale ever.

The heroes who must survive the wild are lightning-fast gunfighters, card-slinging hucksters, mad scientists, or even common townsfolk. But they’d best be quick—their fate is in their hands.