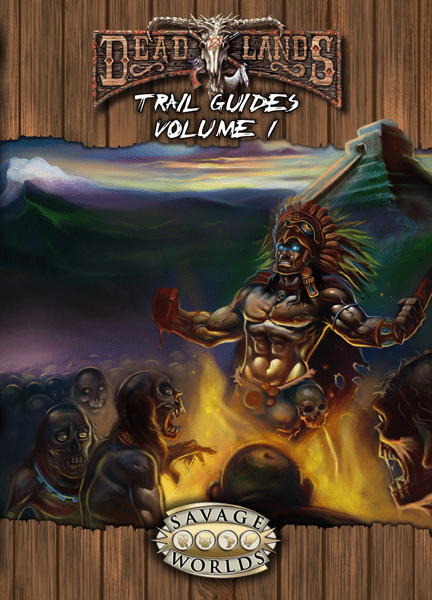 Take a tour of the less-traveled Weird West with your Epitaph correspondent Phineas P. Gage for the first three Deadlands Trail Guides, now compiled into one volume for ease of reference.

In Trail Guide: South o’ the Border, visit beautiful Mexico. Bask in the sun as centuries-old hatred festers in the midst of a three-sided civil war.

In Trail Guide: Great Northwest, you’ll see the snow has its own beauty. But in this land gripped by Famine, you might give your left arm for some jerky, and that might be what it’s used for! When a war between the unnatural beasts in the woods threatens to wipe humanity from the region, will your posse be up to the challenge?

Finally, the Trail Guide: Weird White North takes you to the tundra of Alaska and British Columbia, a land locked in ice north of the amazing Winterline, a fence made by Hellstromme Industries to hold back the cold itself! But something more sinister, more malevolent than mere winter is being held in check…for now!

EachTrail Guide offers you a closer look at the people, places, and—perhaps most important—things you’ll see in each region. And don’t forget the mini-Plot Point Campaigns and Savage Tales in each, as well. You’re bound to have fun or die tryin’!

Deadlands Trail Guides, Volume 1 is not a complete game. It’s a supplement for the Deadlands Reloaded setting for the Savage Worlds game system.