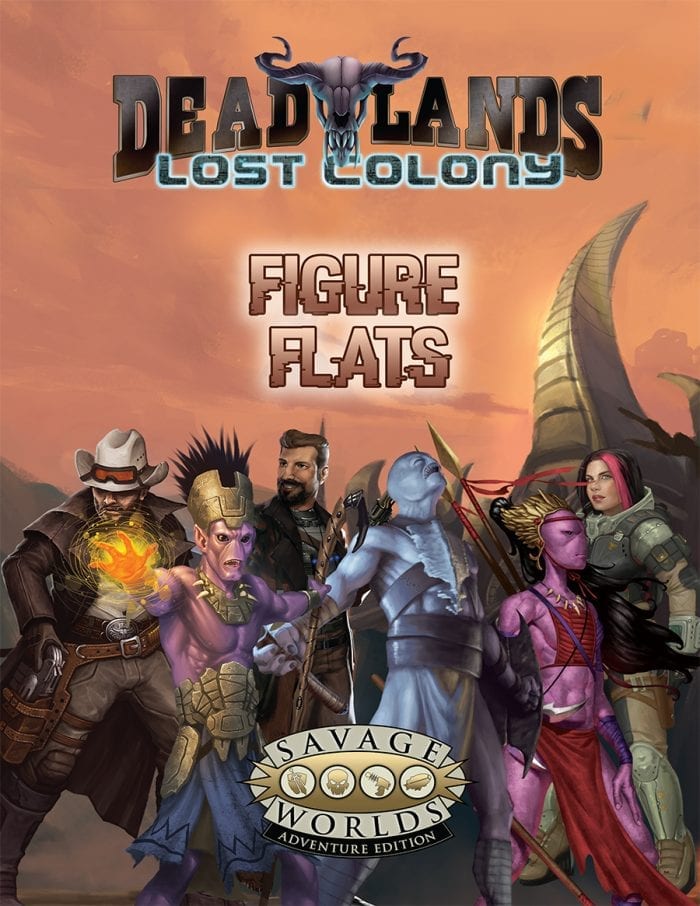 Deadlands: Lost Colony Figure Flats PDF contains more than 40 individual pieces of science fiction Western art for print and play use at both 25mm and 35mm scale (your PDF reader needs to be able to show layers to switch between the 25mm and 35mm scale).

The Lost Colony Figure Flats contains heroes like Debbi Dallas, the Colonial Ranger, Pilot, Syker, Salvager, Breaker, or Anouk Scout, Shaman, or Warrior. To fill out the ranks of Extras there are plenty of EXFOR and Hellstromme Industries soldiers, Walkin’ Dead, Space Pirates, Diggers, and more Anouks. For foes you can choose between the many critters of Banshee, like prowlers or the feared ga’aknouls, or even take on Vanessa Hellstromme herself.

If you love the 35mm scale for these figure flats, you’ll love our new Deadlands Pawns! The Deadlands Pawns are die cut punchboard (like that found in Paizo’s pawns and other quality board game sets). A Boxed Set of Deadlands: the Weird West Pawns was created during the recent Kickstarter. If you did not pledge for that Kickstarter, no worries—you can sign up for a reminder here. When the pledge manager launches you’ll receive an email invitation so you can order the Deadlands Pawns as part of a physical reward level or as an Add On. We’ll release the Deadlands: the Weird West Pawns Boxed Set on our website around the end of the year.

Preorder Deadlands Lost Colony in Hardcover Print and get the PDF FREE!

Deadlands Lost Colony Kickstarted in Fall 2019. Click here to preorder through PledgeManager.com, then email site.admin@peginc.com for your complimentary PDF!