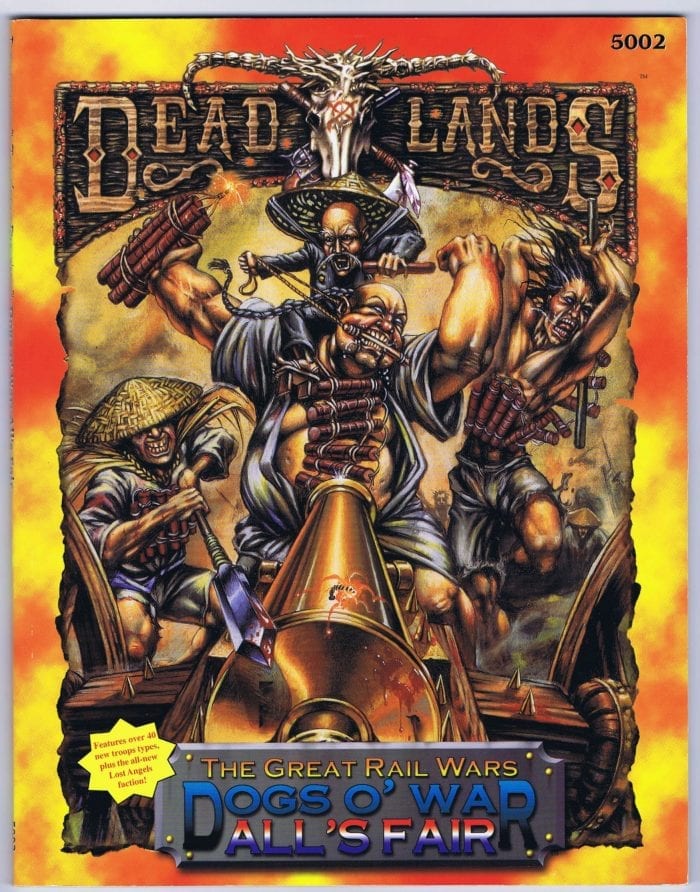 The Rail Barons are one step away from Lost Angels!

To the newspapers, that means the Rail Wars are in their final stretch. To the Rail Barons, it means it’s time to play dirty!

Dixie Rails is in shock at the death of their two most important leaders (as detailed in our roleplaying game adventure Dead Presidents). Bayou Vermillion has pounced on their nearest rival’s weakness and surged forward, but must watch for the ever-present threat of the approaching “Army of the Dead” coming from south o’ the border. Black River is strangely quiet, some say because Mina Devlin has given birth to Joshua Chamberlain’s love-child, raised to adult-hood through black magic! Whatever the truth, Union Blue and Black River seem to have reached some sort of alliance! In the north, Kang has raced through the territories and consolidated his Iron Dragon line with the Great Northwestern, giving him a continuous line from Chicago all the way to Shan Fan! Doctor Hellstromme, long the favored Rail Baron of this nefarious war, has seemingly dropped out of the race! Double-crossed by Smith & Robards, barred from the Denver-Pacific line, and with his closest rail team missing deep in the Rockies, Wasatch is on the ropes. But even a few automatons and X-squads can wreak a lot of havoc! And now a new player has entered the game—one bent not on building rails, but on destroying all the others. Reverend Grimme’s Lost Angels are on the move!

The Great Rail Wars are entering the final stages. Inside this book you’ll find complete updates on all the rail barons, over 40 new troops for their cause, new heroes, and veteran versions of old standbys! There’s also a brand new faction for you to play—Reverend Grimme’s cannibalistic cult of Lost Angels! It’s Hellfire and Brimstone all around when these bad angels come to town!

There is no PDF for this product currently.