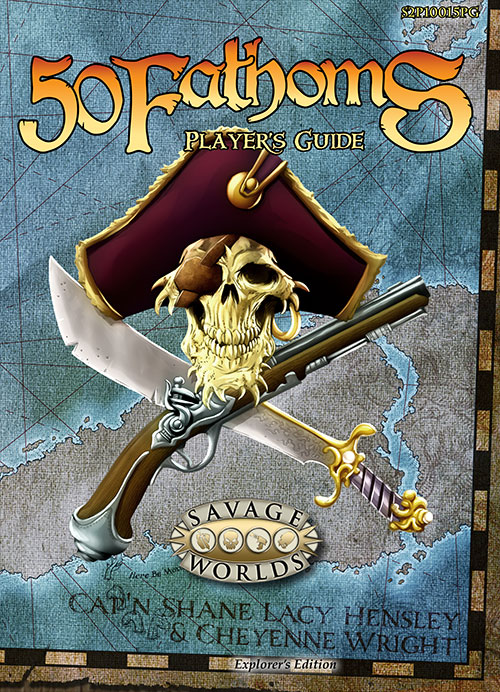 The world is drowning. The natives say three witches in Ograpog were sentenced to death directly by King Amemnus, drowned by the rising tide. With their dying breath, they cursed Caribdus, the land itself, to drown as they were, to drown in fifty fathoms of cold dark sea.

The people of Caribdus are adapting to their wet new world. Crab-like scurillians, massive grael, lonely doreen, mysterious kraken, cruel kehana, and the near-human masaquani now sail the seas aside the new visitors, humans from the age of piracy, dashing corsairs, bloodthirsty bucaneers, and savage sea dogs drawn from the mists of earth on unfamiliar tides. Many believe these visitors to be destined to defeat the Sea Hags and save Caribdus from a watery grave, but most seem interested only in joining the plunder of forgotten treasures in a drowning world.

This new Explorer's Size edition of the classic and much-loved 50 Fathoms includes the updated text of the original game, plus the 50 Fathoms Companion, all compatible with Savage Worlds Deluxe and beautifully colored by three-time Hugo Award winning artist Cheyenne Wright!

Our player's guides provide the first section of each of our Savage Settings and let players get all the information they need without revealing any GM secrets. Even better, the 50 Fathom's: Explorer's Edition Players' Guide contains a “site license” that lets you print a copy for each of your players so they'll have the rules they need for their characters at their fingertips. Give 'em a Players' Guide, and let your players do the work!