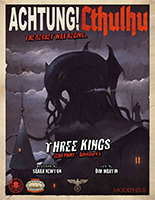 Three Kings is the first in a series of standalone adventure supplements in the globe-spanning Zero Point campaign for Achtung! Cthulhu written by Sarah Newton (Legends of Anglerre, Mindjammer) and converted to Realms of Cthulhu by Dave Blewer (of Sundered Skies fame). Join a band of heroic soldiers, agents, and partisans behind enemy lines on the eve of World War Two, as they discover the unspeakable horrors of Castle Karlstein in occupied Czechoslovakia!

If you didn’t think that was enough, be sure to check out their incredibly value-packed bundle deal! Kick of your campaign with the new Three Kings and get a copy of Realms of Cthulhu for the ludicrously low price of only $14.99! That’s ten dollars less than the Realms of Cthulhu PDF alone!