If you’re looking for something exciting to put in your ears, head on over to the Soundbooth Theater website to download two new Savage Worlds audiobooks adapted from published short stories by authors Clint Black (Savage Worlds Core Rules Brand Manager and Community Manager) and Chris Lites.

First up, there’s Faces of Destruction, a Tale of Necessary Evil by Clint Black. This short and FREE, seven-minute story, ripped from the pages of Wendigo Tales Volume Zero, takes place in the world of Necessary Evil, a setting for Savage Worlds in which an alien invasion has wiped out most of the world’s super heroes, leaving only the super villains to save the Earth! 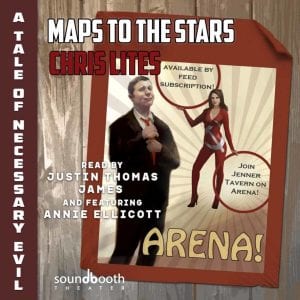 Second, for just $2.00 USD, Maps to the Stars continues with another adventure set in the universe of Necessary Evil, this time penned by Chris Lites:

“Jenner Tavern rode out the alien invasion doing what he does best: looking out for himself. Now, as the super villain host of the popular death match show Arena!, Jenner thinks he has it made. But a visit from an old accomplice is about to remind him that the past never stays dead and all supers, even a pampered celebrity like Jenner, are expendable in the eyes of Earth’s new alien overlords.”

And while snow is currently blanketing much of the country, perhaps making you think back a couple months to the holidays, be sure to check out Kringle Down by our own Shane Hensley, a thrilling tale of snowbound adventure set in Southwest Virginia!