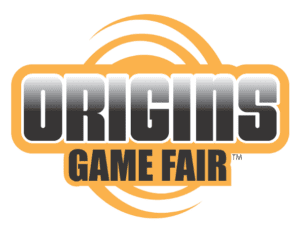 On June 12, the Origins Game Fair returns to Columbus, OH to celebrate its 45th year! For those attending, there will be a number of Savage Worlds and Doomtown events there to keep you playing all weekend long!

Savage Worlds and Doomtown products can be purchased at the Studio 2 Publishing booth (booth 823 in the Exhibitor Hall), while Doomtown/Pine Box Entertainment can be found at table A110 in Gaming Hall A. (Right next to the entrance that connects Gaming Hall A with the Exhibitor Hall.) This is where our very own Christine Lapp will be, so be sure to swing by and say, “Howdy!”

And while you’re there, don’t forget to visit Booth 1166 in Hall B to cast your vote for The Savage World of Flash Gordon™ Roleplaying Game in this year’s Origins Awards!

12pm – Doomtown: Learn to Play Greenhorn Round-Up!*
Saddle up pardners and round up a posse! Join the Pine Box Entertainment crew to learn to play Doomtown or join others for casual open play and receive brand new promos!

12pm – Doomtown Multiplayer: Showdown at Clanton Ranch
Doomtown players will get the chance to participate in the first of a new multiplayer variant developed for the Doomtown card game!

* Please note that the Wednesday, 12pm Greenhorn event is sold out, but there is still room! They will be accepting generic tickets on-site for this event.