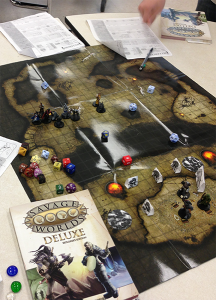 Three things we really care about here at Pinnacle are games, education, and kids. When a story crops up that involves all three, you bet we’re going to share it!

Ronald Corn, principal of Haddon Heights High School and amateur game designer, hosted a convention-style day of gaming for the students during Spirit Week. His goal was to reward students with a break from the typical day and show them some new hobbies they may have never experienced. Sessions ranged from classics like chess and Risk to newer games like Settlers of Cataan and even included RPGs!

“I was tired of hearing gamers dismiss the new generation of gamers, claiming that they would never be able to play classic RPGs because they needed to see the imagery; that they couldn’t create or imagine for themselves. I set out to prove them wrong.” Prove them wrong he did. The superhero RPG had two sessions of 12 students each. Six students asked to attend the second session. By the end of the second session, they wanted to have a regular club.

First he had to decide what game to play. He surveyed the students’ level of expertise and preferred genre. The responses varied greatly in both ability levels and genres. “I needed an easy to learn system that would be easy to pick up and be a lot of fun for the kids. I reviewed over a dozen games and settled on Savage Worlds and was so glad I did.”

The fifteen-member club has played every week they can since April, and the students want more. Ronald can handle the ever-growing group, having convention experience and a home game with up to a dozen players. His only difficulty was in funding.

“The kids are absolutely enjoying themselves. Every session is filled with the sounds of battle and the war cries of the victorious! The Savage Worlds system is just as described—fast & furious. It never gets old to hear the cheers after the dice explode! It’s awesome to see the enthusiasm and watch the camaraderie develop between students who don’t always talk during the school day.”

“I support them the best I can but can’t supply each student. I want each kid to experience owning their own player’s manual. I have such fond memories of researching every spell, every monster. In fact I still do! My love of reading and my love of writing were directly influenced by my love of RPGs. Likewise, I don’t want to charge students to join.”

To help the club, Ronald reached out to the gamer community. “I think we all know that gamers are a generous and inviting group, but what I am experiencing is beyond my expectations. I sent emails and Facebook requests to some of the game designers I knew. My first response came literally seconds after I sent the message. Within the first 24 hours, over 10 game designers and some very big luminaries in the history of RPGs pledged their support. I have to be honest I am humbled and completely overwhelmed at the response and not only from legends in the business but also from people I didn’t even send requests to.”

To help Ronald in his ultimate goal—cultivating a passion in a new generation of gamers—the Haddon Heights RPG Club will gladly accept any game (past or present, in any condition), books, dice, or minis you care to donate. You can e-mail Ronald Corn directly for more information or send mail to Haddon Heights High School, 301 2nd Ave, Haddon Heights NJ 08035, c/o Principal Ronald Corn.