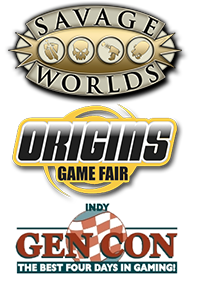 Are you a Savage Worlds GM? Are you going to Origins or Gen Con this year? Then we’ve got a deal for you!

As we mentioned last week, we’re focusing on getting more Savage Worlds games in the event lists for both Origins and Gen Con. We want everyone who wants to play Savage Worlds to have a great chance of finding a game. With that in mind, we’ve got a deal for GMs!

Anyone who registers to run three standard four-hour* Savage Worlds events at Origins or Gen Con will receive a Savage Worlds 2013 GM Event Pack filled with goodies. Our only requirement is that your games must be submitted to the convention in time to get them in the book or be available when registration opens.

Before the convention, you get:

At the Convention (pick it up at the Studio 2 booth), you get:

What should you run? Well, that’s up to you! You can run the One Sheets we provide or run any setting or homebrew you want as long as it uses the Savage Worlds rule set. Games appropriate for new players are preferred, but not required.

How do you sign up? Simple. Once you register your games for either convention, send us your event information.  All we need is the event title, the event ID (you won’t have this for Origins), and the date and time for each event. Please include your t-shirt size as well.

We’re looking forward to having a ton of Savage Worlds games available this year at Origins and Gen Con. If you have any questions, don’t hesitate to contact us at [email protected].