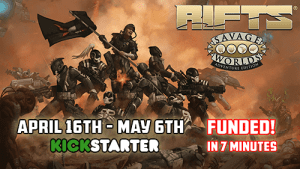 Last week, we launched our Kickstarter for three new Worldbooks for Savage Rifts® (Arcana & Mysticism, Blood & Banes, and Empires of Humanity), and within seven short minutes, the project was fully-funded!

Thanks to your generosity, our big Stretch Goal, The Tomorrow Legion Field Manual, has gone from a digital compilation of previously released PDFs updated to Savage Worlds Adventure Edition, to a printed book of at least 32-pages brimming with revised and all-new content for Rifts® for Savage Worlds! 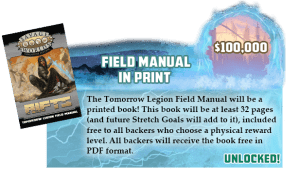 We’ve got more Stretch Goals on deck that will unlock even more secrets of the Megaverse®, so keep an eye on the Kickstarter and, as always, please continue to spread the word about Rifts® for Savage Worlds: American Armageddon!