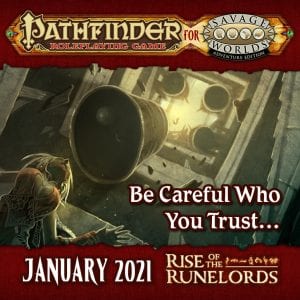 The Kickstarter for Pathfinder® for Savage Worlds is coming up later this month (watch this space!), and to coincide with it, we’ll share an Actual Play series of the adventure Hollow’s Last Hope as a fun and exciting way for you all to see how Savage Worlds and Pathfinder RPG work together for the ultimate fantasy adventure!

The Hollow’s Last Hope cast of characters includes Diffle, (a Gnome Sorcerer played by Jordan Caves-Callarman), Celeste (an Elven Cleric played by Michelle Nguyen Bradley), Kaizen (a Human Fighter played by Leander Lacey), and Kaira (a Half-Elven Rogue played by Diana Restrepo), all with the leadership of GM Meghan Caves. Check out this talented cast in the clip below!

Hollow’s Last Hope is one product made available to backers of the Pathfinder for Savage Worlds Kickstarter, but not the only one! The entire adventure path for Rise of the Runelords will be available as a Boxed Set.

One of the many thrilling fantasy adventures in Rise of the Runelords sends the heroes to investigate the Skinsaw murders:

“A mysterious group of Norgorber worshipers known as the Skinsaw Cult stalks the streets of Magnimar at night. The heroes of Sandpoint must leave their small town and investigate the cult with ties to a former friend.

“They must be careful to not reveal themselves to the cult. Because once the cult is aware of them, the heroes may find themselves in a deadly situation from which they cannot escape.”

To stay up to date on all the latest news about Pathfinder for Savage Worlds, watch this space, sign up for our weekly e-newsletter, and keep your eyes on our various social media platforms including Facebook, Twitter, and Instagram.