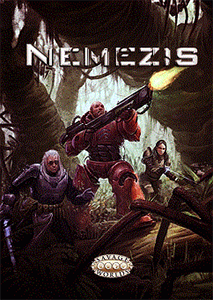 The ancients foresaw that monstrosities from the dawn of time would awaken to destroy the earth and all humankind. These “Dark Gods” and their formless minions came as foretold.

Luckily, the ancients didn’t predict just how lethal humanity would become before the arrival of the “Dark Gods.” Plasma weapons were not in their visions of the Time of Judgement. Armadas of starships launching hundreds of thousands of missiles at once weren’t part of the prophecies.

You are one of the people who do not fear inhuman beasts, servants of dark deities, and unspeakable forces. You have discovered the secrets of the debased nobles, tracked cultists taking over dying planets, and hunted monstrous spawn for sport.

Get your PDF copy of Nemezis now from the Pinnacle PDF Store or RPG Now. Buy before the end of November, and you’ll get the sale price and a free soundtrack!