In the science fantasy-saturated Maelstrom Galaxy, the lucrative career of being a Holo-Net celebrity is the ideal. The players will take on the role of outsiders thrust into this strange culture of streaming and social media fame!

StarStreamers is our attempt to create a story that literally could not be done in any other medium. It’s something that has to be a livestreamed tabletop campaign. That means playing with the conventions of streaming and roleplaying in equal parts. 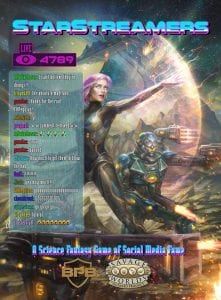 The chat has a large degree of control over certain events and viewers can be “summoned” in battle as a character of their own design. Even the act of chatting and commenting occurs within the actual canon of the game. However, the game isn’t anarchy. It all gets approved by the GM and the players can choose to ignore suggestions.

The chat can also perform various actions to make things easier or more difficult for the characters. Triggering or destroying traps, summoning or banishing monsters, producer interference, and more are all possible.