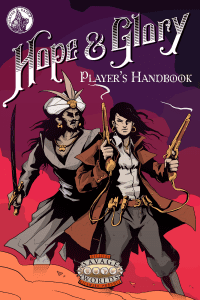 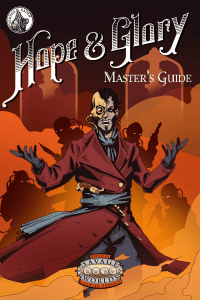 “The Western World was wiped out, the capitals of Europe buried under a thick layer of ice.

In the aftermath of the Catastrophe, a brand new civilization was born in the marriage between Victorian pragmatism and Indian imagination.

Now, after one century of isolation, the Anglo-Indian Raj marches forward towards a future of peace and progress.
It’s a new age of exploration and discovery.”

In Hope & Glory, you can be a Soldier of the Raj, a Tai-pan, a sky-pirate, a psychic, a consulting detective, an inventor, a spy, a man of science, a woman of action, a civilized neanderthal, or a savage human.

This is Hope & Glory, a steampulp adventure of scientific romance, intrigue, and discovery, in a brave new world.

Visit DriveThruRPG today to order the Hope & Glory Player’s Handbook and Master’s Guide and find out why this Savage Setting is not your grandfather’s steampunk!