Get Behind the Scenes of the Hell on Earth: Reloaded Cover 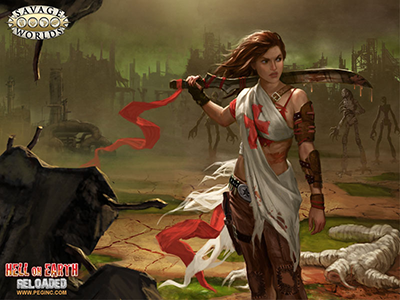 Her name is Carmen Cianelli, she normally works for Cryptic Studios, and she’s been kind enough to give me what I hope will be the first of many guest “stump speeches”—in this case, about the development of the cover.

Sensitive readers take note—Carmen’s words are just a tad saucier than or normal web page fare. So, without further yammering on from me, Carmen Cianelli in her own words:

As I’m writing this, I’m halfway through a five hour flight from San Francisco to Atlanta. I haven’t slept in a while, and just behind me a child has been screaming enthusiastically for the last hour as his Charizard kicks the crap out of his sister’s Blastoise. And you know…I get that. I do. I was eleven when Pokemon became out, and one of the best moments of my childhood was pulling that badass dragon out of a booster pack. Even if I later sold it on eBay along with the rest of my cards to pay for my first graphics tablet.

Still (provided that I’m correct in my assumption that it’s illegal to beat a negligent parent with a rolled up issue of Skymall), that understanding doesn’t change the fact that right now this article is the only thing standing between me and a lawsuit. So please excuse me if this gets a little nonsensical, and thank you Deadlands fans, for keeping me out of prison. I’m small and easily startled. I wouldn’t do well in prison.

Where was I going with this…oh, right. Painting the cover for Deadlands: Hell on Earth.

When Shane asked me if I’d like to write something to go along with the cover’s release, I considered a few different things. A poem declaring my love for Shane and Aaron and their wonderful blend of artistic freedom and direction, perhaps? Tempting though that was, I ultimately decided to take you guys through the process of creating the cover. Many RPG enthusiasts are also artists, some of whom aspire to do this sort of thing professionally. If I can help even one of those understand a little more about how they can do what they love for a living, I can’t turn down that opportunity.

When I got this assignment, I had no idea how loved Deadlands is by its fans, or how long they’d been waiting for it. Good thing, too, because it’s difficult to pee oneself with simultaneous excitement and nervousness and paint a cover at the same time. It was also my first assignment for cover work, the very first time I would eventually get to hold a book in my hands and see something I’d painted printed there. The art order was pretty open: An 8.5″ x 11″ cover pieces of a strong Templar chick in a toxic wasteland. Maybe some hints of a ruined city somewhere. Add in some baddies if I felt like it, but keep the focus on her. Aaaand go!

I had one week to get it done, and since I work full-time as a concept artist over at Cryptic Studios during the day, I wanted to get into painting as soon as possible. My mind immediately jumped to images in extreme perspective. An armor-clad warrior babe halfway through the process of beheading a Wormling, strings of Wormling blood flying through the air. Maybe she could be jumping a motorcycle off of a ruined bridge over a toxic pool while simultaneously slicing through some baddies. Slicing through two baddies. No, six baddies! With an uzi in the other hand, shooting an Anti-Templar in the face! Yeah!

This is what many people first think of when they think “epic cover art”, but I knew from previous experience that with a tight deadline and high expectations, you have to reign things in. So the challenge became how to depict this strong, sexy warrior woman in a way that clearly depicted her as Badass McCutABitch without sacrificing the technical quality by being overambitious.

I sent Shane some references and an explanation of my idea; rather than going the usual action-packed route, I wanted to paint a “between” moment. I felt we could showcase her strength and skill as a fighter without going over the top, leaving room for the viewer to fill in the details of the story based on their own interpretation. With the right staging, pose, and expression, I thought we could play her up as a strong character without catching her mid-CutABitch. Once I got the go-ahead for the general direction, I worked up three thumbnails that fit the direction while still providing unique visuals. I sent them off with a brief narrative for each.

1. I lost my family and I am standing in the wasteland sexily contemplating my life2. Whoa, who dares interrupt my sexy life contemplation? Oh... just a bunch of wormlings. No big deal.3. Yeah, no big deal. Now I'm going to stare at my gun and think about what I want to shoot next.

Is that Budapest in the background? Don’t ask me, ask the stamp brushes I often use to quickly block in cities when I’m making thumbnails that will eventually be re-painted. (Read as: Yes.)

Shane and I agreed that #2 was a good balance between showing her strength as a fighter but also including an interesting narrative. It left room to question what might happen next. Can she take out the oncoming swarm, or is our heroine about to become (pardon the pun) worm food?

On second thought, don’t pardon that pun. It was a good pun, and I don’t make good puns very often. Instead, let’s take a moment to appreciate that pun. Ha. Worm food.

All three of these beg the question that I’ve been asked a few times this past week. Why isn’t she wearing more armor? If she’s about to engage in combat with several wormlings, wouldn’t she want to be more covered? I could give you some long, wordy explanation, but let’s be honest here; I wanted her to be sexy. More armored than the thumbnails, certainly, but I still wanted to show some skin and make her look sexier than I think any “realistic” wasteland warrior likely would. Striking a balance between “tough” and “sexy” can be a difficult thing to do, especially when working in an industry where many women sport chainmail bikinis and wolf hide loincloths. Sure, you can make a character look sexy without showing any skin at all, I just opted not to.

If there is an Alcoholics Anonymous style support group for that, well… I’m sure it will do other people some good. I’ll be over here painting blood-encrusted bellybuttons. My name is Carmen, and I like painting hot bitches.

I did ultimately decide to add some more pieces to her shoulder and upper arm, as well as a slain wormling in the foreground to show why she seems so nonchalant about the approaching danger. Since my style varies pretty drastically from previous covers, I sent Shane a work in progress once I had gotten a little further into rendering to make sure he was okay with the direction I was taking with it. I cut away the background elements to focus on the figure, and fired off another e-mail to show the changes to her outfit and the additional wormling. 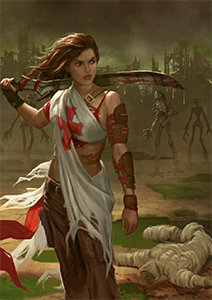 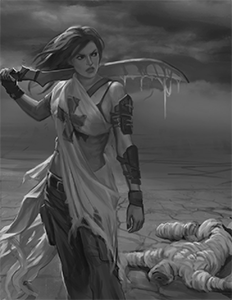 I noticed later on that her head was looking too small, so I sized it up before resuming the final, and sent another progress short with the first color pass once we’d cleared up a few more details.

With another thumbs up and some continued feedback on her design (adding bullets to her belt, giving her a gunslinger-style holster to bring out that western vibe, and other great design details that Aaron Acevedo, PEG’s wonderful art director, brought to the table) I pushed ahead to the “final” image. Once Aaron got ahold of it and started working with the layout for the book itself, we agreed it would work better as a wraparound image. Aaron sent me a mockup, including an easy way to fill space on the back cover using some destroyed concrete, and I pulled one last all-nighter to paint it up and put it together.

What we ended up with in the end, you’ve already seen.

I want to extend a huge thank you to the PEG crew for letting me take a crack at this and being so fabulous to work with, Simon Lucas (my fantastic coworker at Cryptic Studios) for recommending me for the job, and to my local Starbucks crew for being there at 5am to keep me stocked up on caramel macchiatos. I also want to thank the wonderful Deadlands fans for the support, encouragement, and warm welcome I’ve received over this past week. You’re a fantastic bunch of people, and it has been an absolute pleasure to be a part of bringing the next Deadlands installment to life.