FINAL WEEK for Pathfinder® for Savage Worlds on Kickstarter 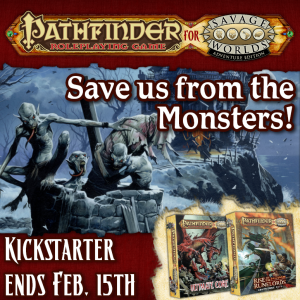 The clock is ticking, and with just SIX DAYS left in our Kickstarter for Pathfinder for Savage Worlds, we’ve got some exciting updates for you as well as a number of upcoming Twitch streams you won’t want to miss!

First of all, thanks to your generous support, we have already unlocked several amazing stretch goals including a print edition of Guide to the Hinterlands for Rise of the Runelords and multiple expansions to our forthcoming Pathfinder Companion.

Plus, if we reach the $325,000 goal before the Kickstarter wraps up next week, the Pathfinder Companion will be released as a glossy, full-color, hardcover book AND added FOR FREE to every physical reward level!

Over the next few days, we’ve got loads of all-new Pathfinder for Savage Worlds programming coming to the official PEGinc Twitch channel, so mark your calendars so you don’t miss any of the following. All this leads up to the conclusion of the Kickstarter next Monday night (February 15th) at 10pm EST (7pm PST): 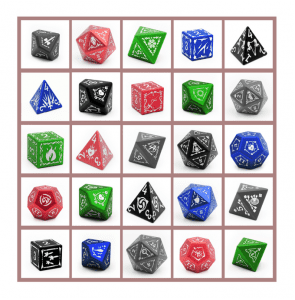 And finally, with just a couple days to go, be sure to check out our friend, Level Up Dice’s Kickstarter—the Adventurer’s Curated Dice Collection!

Use these specialized dice to create a unique, customized set for your character. They recently unlocked additional color options and the next couple stretch goals ($30,000 and $35,000, respectively) will unlock five more dual anodized color options and new spell/rune designs! Now you can build a dice set that perfectly represents your character’s class, weapons, and abilities.

The Level Up Dice Kickstarter ends at 12pm EST (9am PST) on Thursday, February 11th. Pledge today so you have new dice for your Pathfinder for Savage Worlds characters!