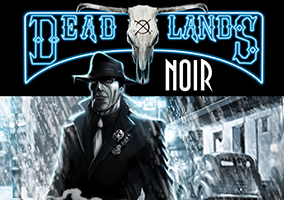 We’re down to the wire with the Deadlands Noir Kickstarter campaign, and we couldn’t be happier with the results. A large part of our Kickstarter plan was to gauge fan interest in the new setting. You fully funded the project in about three hours and have chewed through every stretch goal we’ve put out there, so I think it’s safe to say that you’re interested!

Speaking of stretch goals, we’re not done yet. You’ve already exceeded our content goals for the setting, but we thought there was still a little more we could give you. Check out the Deadlands Noir Kickstarter Updates for details on stretch goals for the last 48 hours. If you’re new to the Kickstarter, you can also find a recap of all the updates so far as well as all four parts of the illustrated audio drama Hardboiled in the Big Easy. [Update: You can also get the illustrated audio drama from Shane’s YouTube channel!]

If you want to really get into the setting, and I mean really get into it, we’ve added eight more Hardboiled backer slots to the Deadlands Noir Kickstarter campaign. At that level, you can become a real name in an unreal world. Beat feet if you’re interested buddy—those things go faster than a get-away driver on the lam!

And be sure to listen to Episode 64 of the Atomic Array podcast with special guest John Goff, lead author for Deadlands Noir. It’s their first show dedicated to Savage Worlds, and they get John to talk about the system, its origins, Deadlands Noir and the Kickstarter campaign, and even his days as a professional interrogator.

By any gauge, this project has been a wild success. We’re humbled by your outpouring of support, excited and energized by your enthusiasm, and really looking forward to turning our attention to development. You have our sincerest thanks.