Deadlands Gets Bigger at Visionary Comics! 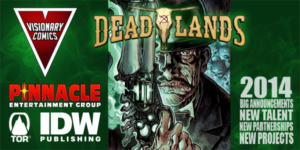 The wide open plains of Deadlands’ Weird West are gettin’ even wider over at Visionary Comics. The folks at Visionary are nearly twice as many as they once were, with a near-doubling of their staff, and they’ve also added Jeff Mariotte (comic writer and author) and our own Shane Hensley (creator of Deadlands) to the team, expanding Deadlands in comics and prose alike!

Visionary will be working with IDW Publishing to publish their first trade, Dead Man’s Hand, collecting the Deadlands one-shots published by Visionary and Image Comics. These collect all of the “All-Star Westerns” into one volume.

There will also be a new line of novels published by Tor Books coming later next year. The first three books will be by New York Times best-selling authors Jonathan Maberry, Seanan McGuire, and Jeff Mariotte. Release dates are not available yet, but production is hummin’ right along!

And even with all that going on, Deadlands is still in active development for a live-action TV series—more details to come as we have them available.

It’s high time you join us on the High Plains!