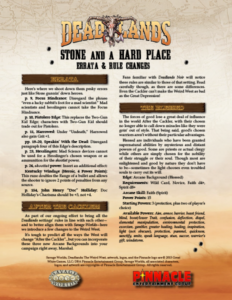 Howdy, amigos! Some wranglin’ jobs keep you busy as a herd of homesick heifers, and we’re bringin’ a little of that to you. As part of our ongoing effort to bring all the Deadlands setting rules in line with each other—and better align them with Savage Worlds—we’re rolling out a barrel filled with a few changes* to the Weird West. Namely, the blessed and voodooist Arcane Backgrounds, and Harrowed as they appear in Stone and a Hard Place. You’ll also find about a half dozen bits o’ errata for Stone that didn’t quite make it to the printer.

It’s tough to predict all the ways the Weird West will change “after the Cackler,” but you can incorporate these three new Arcane Backgrounds into your campaign right away. Ain’t no point in waitin’ none, compadre.

The full slate of Harrowed Edges from Stone and a Hard Place, along with some rules to help keep the Harrowed’s players on their toes, is also waiting for you. Being undead just got a whole lot more evil.

* You got me, partner. It is sort of small barrel when you really look at it. But trust me, it’s chock-full of fun…