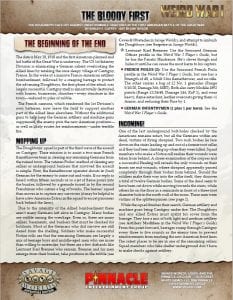 Now available in our store, The Bloody First by Ensley F. Guffey is a FREE Savage Worlds One Sheet™ for Weird War I that pits the heroes against unfathomable creatures in the first American Battle of the Great War!

“The Doughboys’ squad is part of the third wave of the assault on Cantigny. Their mission is to assist a two-man French flamethrower team in clearing any remaining Germans from the ruined town.

“Due to the intensity of the Allied bombardment there aren’t many Germans left alive in Cantigny. Many bodies are visible among the wreckage. Even so, there are many cellars, basements, and bunkers that must be checked for holdouts. Going below ground is safer… right?”

This product requires the Savage Worlds core rules and the Weird War I Player’s Guide and War Master’s Handbook to play, as well as the free download Weird War I Conversion for Savage Worlds Adventure Edition.

And right now, you can get print versions of all of the above and much more in our discounted Weird War I Print Bundle! This incredible bundle contains an array of essentials including limited edition hardcover core books, War Master Screen + Raid on Fort Douaumont adventure, combat maps, Bennies, dice, figure flats, archetypes, and more, all for only $139.99 (retail, $198.79)! And for just $5.99, add our special Harlem Hellfighters Bundle to your order with all proceeds going to the Innocence Project.

March to Victory with The Bloody First and these incredible discounted Weird War I bundles today! 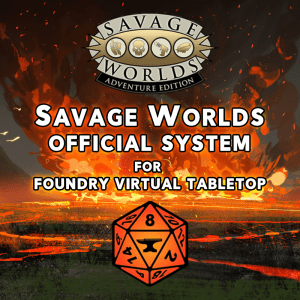 If you’re a Foundry VTT user, you’ll be thrilled to know that the Savage Worlds Adventure Edition official premium core rules module is NOW AVAILABLE in our store for Foundry Virtual Tabletop!

Plus, if you are already playing Savage Worlds on Foundry VTT with the FREE Savage Worlds Adventure Edition system package, this module includes a macro that will update ALL Actors with the full-text versions of Items applied to existing characters. 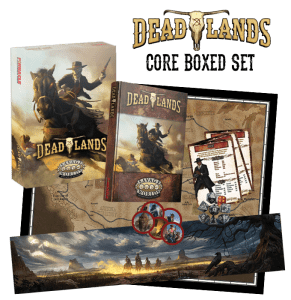 If you missed out on our Kickstarter campaign for Deadlands: the Weird West, you have until January 4th, 2021 (less than two weeks from today!) to jump in as a late backer at PledgeManager.com before the whole shebang skedaddles off into the sunset.

Through the Pledge Manager, you can preorder the game in full color, hardcover print and snag some of the reward levels including boxed sets of books, maps, adventures, cardboard pawn miniatures, deluxe metal dice, a dice tray, Marshal’s Badge, and much more!

If you have any questions at all, email us at [email protected] and we look forward to seeing you out in the Wild and Weird West!

If you’re wondering what the team has in store for this upcoming project, be sure to carve out an hour-and-a-half to sit back and watch this fantastic discussion over on YouTube in anticipation of next month’s Kickstarter.

Additionally, next month’s Kickstarter will also feature a Boxed Set for Rise of the Runelords with all six books of this highly regarded Adventure Path. Retail release is planned for Q4 2021.

Check out the Wild Die Harder Q&A and watch this space for further details! 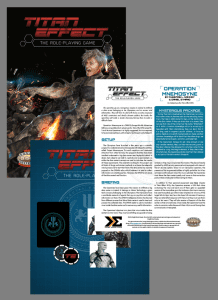 Just in time for the holidays, “Ace” licensee Knight Errant Media has unleashed a spectacular half-price digital bundle for their Titan Effect RPG that includes the setting book, a handful of One Sheet™ adventures, a killer soundtrack, maps, assets for VTTs, and much more.

You get almost $50 worth of SWADE-compatible excitement for just $24.71!

If you’ve been thinking of checking out Knight Errant’s explosive mix of espionage, biopunk, and superpowers, now is most definitely the BEST time!

Also if you’re an inspired game designer with ideas for expanding the Titan Effect RPG universe, Knight Errant Media has a Community Content program under the Savage Worlds Adventurer’s Guild (SWAG). Creators can now produce and publish SWAG content for use with the Titan Effect RPG without express permission from Knight Errant Media, by following the guidelines posted on their site.

Explore the wild universe of Titan Effect today, and then forge your own exciting content for it tomorrow!

Fans of both games responded globally to the information with enthusiastic comments on social media, forums, and news sites. As user “Doctor Futurity” said on ENworld’s Comments:

“As a fan of Pathfinder and Savage Worlds this feels like a peanut butter and chocolate moment.”

Paizo President Jeff Alvarez said, “We are thrilled to be partnered with Shane and his amazing team at Pinnacle on this project. I remember when Shane approached us about the partnership over a year ago and to see that we are just a few short weeks away from their Kickstarter is really exciting.”

Shane Hensley of Pinnacle responded: “I’ve loved Pathfinder’s Adventure Paths forever, so we’re beyond thrilled our friends at Paizo are letting us share their amazing tales with our Savage Worlds audience.”

The Pathfinder for Savage Worlds boxed set—as typical for Pinnacle Entertainment Group—will include the core rulebook as well as other elements of game play for Savage Worlds like Bennies, Action Deck, Templates, Game Master Screen with adventure, Powers Cards, and more.

For the Kickstarter planned to launch in January 2021, a Boxed Set for Rise of the Runelords with all six books of the Adventure Path provides starting adventures for many gaming groups who have not yet visited the town of Sandpoint.

Retail release of all items created in the Kickstarter is targeted for Q4 2021.

To stay up to date on the latest news about Savage Pathfinder and other releases from Pinnacle Entertainment Group, sign up for the weekly e-newsletter linked below. News is also shared on social media platforms Facebook, Twitter, and Instagram.

Trail’s End for the Kickstarter for Blood Drive: A Deadlands Booster Campaign

Thank you all for joining us out on the dusty trail and making our Kickstarter for Blood Drive: A Deadlands Booster Campaign a big success! As the sun sets slowly in the West, we can rest now, knowing we brought the herd safely to journey’s end.

With the Christmas break coming up, we’ll be taking a short rest before getting back in the saddle to finalize our files.

Also, we need to wait for Kickstarter to collect your pledges and give us a final backer report. So things will be quiet on this front for the next few weeks.

After the New Year, we’ll be working to put the finishing touches on the Blood Drive PDF so we can get that out to you. We’ll also be setting up the pledge manager so you can finish the checkout process (give us your address, grab some extra goodies, and pay for shipping).

Watch for future Kickstarter Updates for details on how to download your pdfs and on the progress with the pledge manager.

And please note that if you want the new Deadlands: the Weird West core rules and supplements as fast as possible, you have until January 4th, 2021 to pledge as a late backer at PledgeManager.com! Shipping begins February 2021!

New Free One Sheet™ Adventure for Deadlands: the Weird West

“Take a break from the trail, friend!”

“When gold was found in the surrounding hills, the town of Avery’s Bluff came into existence practically overnight.

“Now that some of the townsfolk have stumbled upon ghost rock, it truly is a boomtown. In all the commotion it almost went unnoticed that more and more silver and gold trinkets began to disappear. Eventually, people started saying either thieving magpies must be gathering all the shineys or a gang of thieves is responsible for the missing items.

“Marshal Burn welcomes any help he can get with the little thievery problem in his bustlin’ boomtown. Of course, this is Deadlands, so things are rarely as they seem…“

Please note that if you want the Deadlands: the Weird West core rules and supporting goodies as fast as possible, you have until January 4th, 2021 to pledge as a late backer at PledgeManager.com! Shipping begins February 2021.

While we ALL wait patiently for the launch of the Kickstarter for Savage Pathfinder™ in a few weeks time (!), tomorrow night (Wednesday, December 16th), members of the Savage Pathfinder™ development team will be sitting down (virtually) with the hosts of The Wild Die Podcast over on Twitch.

Follow this link to post your questions for the team right now, or drop ’em into chat during the live stream.

Tune into the Wild Die Podcast channel on Twitch tomorrow night starting at 9pm Eastern, and have your Savage Pathfinder™ questions ready!

We are now just days away from the release of the Savage Worlds Adventure Edition core rules as a premium module for Foundry Virtual Tabletop.

As soon as the Foundry VTT keys are available for purchase, you will be able to grab the module from our main SWADE product page and import it into Foundry VTT.

Get ready to upgrade your Savage Worlds experience with Foundry VTT!