Join us at Genghis Con and Con Nooga! 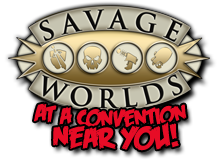 ntertainment and the Savage Worlds crowd aren’t quite up to Santa standards (everywhere, all the time) yet, but we are more places more often than you might think! If we’re in your neck of the woods, come on out and see us.

*And guy who types these things, which is the only reason he’s first on the list. 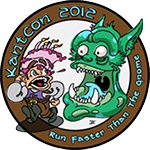 you think that list of con appearances isn’t enough, you have the power to change it! If the KantCon 2012 Preregistration Kickstarter Campaign reaches its stretch goal, they’re going to import our own founder, president, luminary, and fairly-high poobah Shane Hensley, author of Savage Worlds, to KantCon 2012.

Whether you want to see Shane live at KantCon, want to see how a Kickstarter campaign can be used for convention-planning, want to bring more gaming to Kansas, or just really want to see work-in-progress images for a Jabbergluck mini*, be sure to drop by their Kickstarter today!